Guest Post
Anthony V. Martinez, West Point graduate & executive board member for the Society chapter at Texas A&M University-Central Texas, joined Fort Hood’s Warrior Transition Brigade and got involved in a leadership position as a means of healing after the war. This week we would like to share with you a news story about Martinez, by Herald staff writer JC Jones, highlighting how he went from being a lieutenant, captain, commander, and then post-traumatic stress disorder victim to being a peer mentor and a leader who makes a better world.
Leadership organization helps with West Point grad’s healing after war 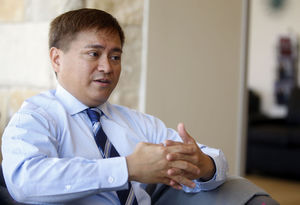 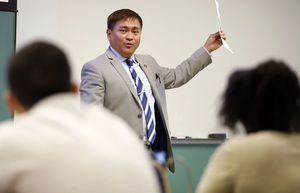 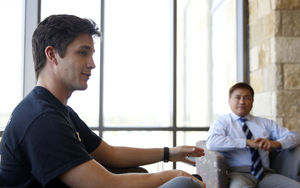 Photos by: Eric J. Shelton | Herald
In 2011, Capt. Tony Martinez joined Fort Hood’s Warrior Transition Brigade after suffering from the silent scars of post-traumatic stress disorder, following deployments to Iraq and Afghanistan.
The West Point graduate said he felt “heartbroken” when the organization he’d dedicated his life to deemed him no longer fit for service. He struggled with anger and depression, and said he became very withdrawn.
Through the Warrior Transition Brigade, Martinez had the opportunity to continue his education, and began taking classes at Texas A&M University - Central Texas, where he was introduced to The National Society of Leadership and Success, the nation’s largest leadership society.
Through the organization, Martinez said he was encouraged to make goals, and began to come out of his shell.
“That helped me be social. I knew that I needed to commit. If I’m a leader of such an organization that helps leaders make a better world, I have to start with myself,” he said.
“I have been a leader, being a lieutenant, being a captain, being a commander in command of a unit in Afghanistan, but that disintegrated when the post-traumatic stress kicked in. ... I had no idea how to cope.”
Joining the society surrounded him with positive people, Martinez said, and allowed him the opportunity to share his experience with others. He now serves as the executive administrator of the school’s NSLS chapter.
“As I got involved in the leadership position, I felt an ownership."
The university’s staff advisor for the society, Ben Belz, said Martinez adds something to the organization that he strives for on campus.
“Tony had so much life experience before he came here, and that’s something that I want to see more of, students that have life experience making an impact on campus. ... Students that have life experience are going to bring stuff to the table that students that are 18, 19 years old, aren’t going to have. That’s something we can really utilize here,” he said.
Martinez attributes much of his healing to the opportunities provided through the Warrior Transition Brigade.
The unit “has allowed me to participate and pursue my academics. Once you join an organization as large as the Army, it sucks you in. It becomes your life, and sometimes it becomes hard to do your civilian goals,” he said.
Without the brigade, “I don’t think my phase of recovery would be as advanced as it is now. I would not be back in college, pursuing a higher level of education,” Martinez said.
Because of the leadership skills Martinez has learned through the National Society of Leadership and Success, he plans to involve other soldiers from the Warrior Transition Brigade in the organization, in hopes they will also find healing.
A lot of soldiers in the transitional unit are bitter because they think they are broken, Martinez said.
“A lot of them are hopeless, and when they leave, the bitterness, they take with them. I hope my story will inspire them to see that is not the case,” he said.
Originally posted on KDHNews.com