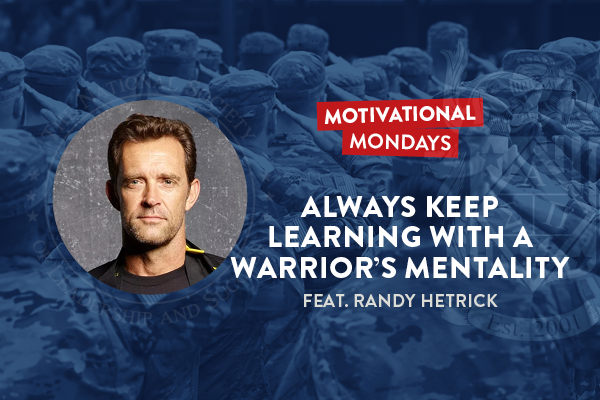 Randy Hetrick is a former Navy Seal and Commander of multiple post 911 anti-terrorism operations. The 14-year military veteran is also the creator of TRX Suspension Training®.

In this episode of Motivational Mondays, he discusses how his diverse life experiences and military discipline helped him build a successful business. He also shares how embracing a ‘warrior’s mentality’ constantly pushes you to be better.

It’s no secret that Navy Seals have to stay in peak physical condition. In 1997, while deployed as a Commander in Asia, Randy’s military mission was put on hold leaving him and his servicemen with the challenge of staying in top shape without gym equipment. So Randy began experimenting with his jiu jitsu belt after discovering he had accidentally packed it in his deployment gear.

Randy’s goal was to strengthen his arms to prepare for holding heavy equipment while climbing up the side of a freighter. He didn’t have anything on which to perform pull-ups. So he threw the jiu jitsu belt over the top of a door, tied a knot in it, and pulled himself up while holding onto the rope.

That moment of innovation became the foundation for the TRX fitness brand.

There were naysayers in the beginning, and then they started using it. At the time, it remained a simple hobby. But when Randy attended Stanford Business School, he was training on his strap at the athlete training center. Coaches and other athletes took notice and asked him to make them one.

It was only then that he decided to look at creating a business from his thrifty idea. Today, TRX is a multi-million dollar business.

The Importance Of Proving Your Concept

When you think about launching a new venture, Randy notes that you must ask yourself, “Should I do this?” The answer can only come from having a real solution to a real problem.

If you can’t articulate the problem you're solving, go back to the drawing board. Randy started with a problem and worked toward solving it. That’s the approach he recommends young entrepreneurs make, no matter where they are in the process.

You want to find a unique perspective that differentiates you from something else. If you create a genuine improvement on something, you’re likely to build on the success and familiarity of that good or service. It can help you shortcut the process but don’t think of “shortcut” as in avoiding the work.

You still have to put in the work to bring your concept to the people who will ultimately express interest in your idea —or not. If you’re starting from scratch, the benefit is that there isn't a competitor. But you have to be out there forging the path. There are pros and cons to each approach.

How does Randy manage risks versus taking blind risks? What is the difference? Listen to the whole episode to learn his thoughts about these two distinct approaches to operating a business.

How To Learn With The Mentality Of A Warrior

Randy believes the idea of “never stop learning” is critical because it means that you’re paying attention in life. If you make mistakes, you will remember them because they sting. They require personal accountability. It’s never fun when the outcome is negative.

But Randy firmly states that you should take on new challenges to stretch yourself. His goal is to continue to strive to be the best version of himself. He does that by putting himself in uncomfortable positions, facing the unknown and pushing himself to continuously learn.

He emphasizes that the ‘warrior mentality’ builds on the concept of being prepared so you can be in charge. The times in life when you are the most nervous are when you are insufficiently prepared.

Randy's most significant piece of advice is to do the hard work to know your stuff, so you're not left unprepared. So when you step on the podium — or whatever platform, you're confident with competence. Do this, and you can command your audience and have them say, "Wow, this cat is good!"

Listen to the bonus episode to learn how preparation leads to success and Randy’s advice for those considering a military career.

How to Use Transformational Leadership to Inspire Your Team