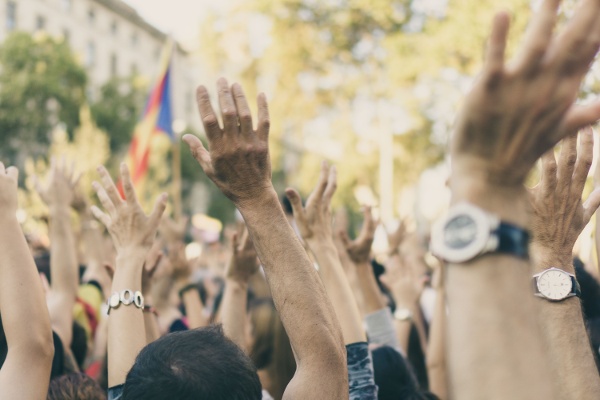 Nearly six in 10 college students would protest publicly for a cause they care about, according to a survey conducted over the last three weeks that highlighted college students’ beliefs surrounding political, social and environmental issues.

The National Society of Leadership and Success, which conducted the poll, is the nation’s largest leadership honor society where students are selected by their institutions based on their leadership potential or academic standing, according to their website.

Of the 3,500 students who participated in “The 2018 NSLS Student Activism Survey,” almost 59 percent stated that they would publicly protest for a cause that they cared about.

“I believe that life is too short to let what you think stay in your head,” said survey participant Mikela Short.

“I think the most interesting part to me is the one that impacts them the most, educational opportunities for everyone,” said NSLS President Charles Knippen. “That part wasn’t a surprise to me because every single one of them is living it. These are all current college students, they are all being saddled with that debt that you get from going to college, they are going through that process of trying to figure out what they want to do with their careers and how they actually make it affordable.”

For the survey, NSLS reached out to students who have been inducted into their leadership development program within the past year. It is a five-step program where students discuss and hold each other accountable for their goals, attend speaker lectures, participate in leadership training days and take online assessments that focus on developing communication skills.

“We wanted to get a better understanding of how active the students would be, what gets them going and what gets their heart pumping,” said Knippen. “To what length would they go out and actually participate and actually be engaged in that process of activism towards a cause that they are passionate about?”

Though the majority of survey participants stated that they would publicly protest for a cause, Knippen thought the number would be higher.

Additionally, the survey focused on the current political climate in the United States with nearly 57 percent of students labeling it as negative while 14 percent found it to be positive. Around 44 percent believed the country is too divided, resulting in extremist behavior from both parties; 25 percent noted that they had never felt worse about the political scene within the U.S., according to the survey.

“I think students of all backgrounds and cultures have the ability to change anything and everything,” said survey participant William Chamberlain. “I have read from multiple sources that people in my generation, meaning millennials, are part of the information age. Any answer we could ever want is right at our fingertips. I believe that this breeds an understanding of each other. Although there are still issues with racism, police brutality, discrimination against everyone not heterosexual and so many other issues, I feel that we as people are moving towards an age of understanding of all people.”

Are you thinking of getting an internship while finishing your degree? Or maybe you’re getting ready to graduate and starting to look for that perfect career launch. Either way, a stunning resume is required to start you off on the right foot.

Creating the perfect resume can be intimidating. Once you get going, you’ll find it much easier to write about your experience professionally and with confidence. Here are some tips to start you off down the path to the right resume for you and your ambitions.

At minimum you want to include 3 pieces of information: your first and last name, telephone number you can be reached at, and a professional email address.

If you are a current student, your .edu address will suffice. It’s very easy to create a new email address on email hosting sites like Gmail. Make sure once it’s out there that you are checking it often and use it to connect with job prospects.

It’s not required to include your address on a resume. It can work to your advantage in some cases though. If you’re applying for a position where your school is located or where you are from include that address to show you live nearby.

Lastly, you can include a URL to your LinkedIn profile. It needs to be up to date if you decide to include it. What would you think if you saw an amazing resume on your desk and an average LinkedIn account that doesn’t boast the same accomplishments?

Objective, Summary, or Forget about it?

Space on your resume is prime real estate and shouldn’t be sold to just any information if it’s not going to benefit you the most. Consider not including an objective or summary statement. This can give you another two to three lines of precious space on your resume.

Check out Lily’s article on The Muse to read about the one reason an objective statement may be a good item to include.

How you describe your work history and experience is guaranteed to go a long way. You’ll want to include how and why a certain responsibility was carried out to give future employers a better idea of what skills you possess that they are looking for to fill their job opening.
Here’s an example for a retail position. Before: Organized clothes displayed in store
After: Managed 30-40 clothing displays in store by organizing merchandise and returning unsold
items in an orderly manner.

See how the second statement paints a stronger picture of what skill is being represented and how it contributed to the store’s success?

Select the right action verb to start your achievement statement. Katharine Hansen, Ph.D. and writer for LiveCareer.com, says, “Action verbs form the heart of resume experience sections, with most bullet points in these sections ideally kicking off with powerful action verbs.

Use this formula to craft your achievement statements:

Ever heard that no two jobs are the same? Well, the same is true when it comes to your resume. Using the same resume for multiple job applications will not give you the results you expect. The extra effort taken to tailor your resume will make it stand out from the rest of applicant pool.

Applicant tracking systems are become more and more common, so there is a good chance that your resume is going to be read by one before any person sees it. These systems assess whether you have used certain keywords the employer is looking for and if you meet other requirements they are looking for. The system tells hiring managers who the best candidates are to fill the position, so tailoring your resume gives you a higher chance of making that list.

Use verbs from the job description. This is one time where words are not just words. “Design” and “create” may be synonyms, but there’s a good chance the applicant tracking system is going to pick up the one that is used in the job description. So, if the description reads “design a business plan”, then your achievement statement should begin with that same action verb.

Revise, not rewrite. When you’re changing out action verbs that doesn’t mean rewriting the entire achievement statement. It is perfectly fine to revise only the action verb. However, you may need to write new achievement statements if a job description is calling for different skills from a previous position you’ve applied for.

Here’s a short video from Nicole Williams, a career expert, with some tips on using a company’s website to further tailor your resume and why it’s important.

As you’re drafting your resume, you may want to have another set of eyes to look it over. Visiting a career advisor or any advisor on college campuses is a great option to get additional information and editing assistance. Employers from various industries share what they are looking for on resumes with career centers, so schedule an appointment at yours to take advantage of that knowledge.

If you’re unable to schedule an appointment with a career advisor, consider using other resources online. There are countless resources available at your fingertips.

That resume isn’t going to write itself, so get to it! These tips are guaranteed to get you a great first draft of your resume and the rest is up to you.