Take on the Impossible 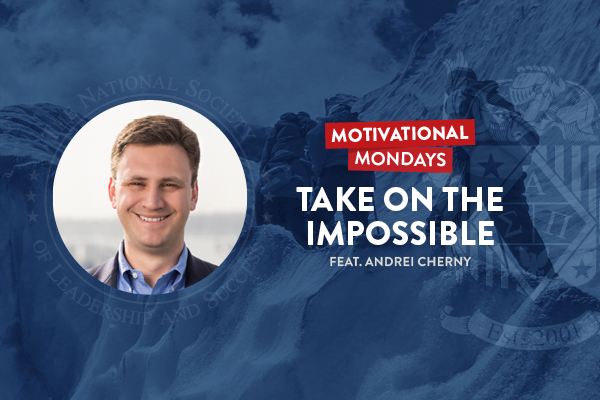 From being the youngest White House speechwriter in American history to prosecuting financial crimes as an Assistant Attorney General — Andrei Cherny has spent his life fighting for what he believes in.

Today, Andrei is reimagining the banking industry as CEO of his environmentally-conscious financial company, Aspiration.

In this week's Motivational Mondays, we discuss the importance of corporate responsibility and learn how we can do well and do good at the same time.

In a story of right place, right time, Andrei shared how he was handpicked by President Bill Clinton to become the youngest White House speechwriter in American history.

Interested in politics from a young age, Andrei went from volunteering in local elections to working the election columns for his university newspaper. By chance, Andrei happened to write an article about Bill Clinton. Serendipitously, the White House communications director visited his campus and happened to read that column. Impressed at what he saw, the director shared it directly with President Clinton. Equally impressed, President Clinton passed it on to his Cabinet.

And that’s when it happened, Andrei recalls.

Fear of swimming in uncharted waters could’ve kept young Andrei at bay — but knowing a chance like this comes around once, Andrei dove into the deep end! When opportunity knocks, you might not be ready ... but take a chance, and find out.

As Andrei recounts how his appointment came to be, Andrei admits he was nervous jumping into that role; afraid of what he didn’t know. But with the nervousness came great excitement about what could be. Andrei urges others when faced with unfamiliar territory to "jump in completely!"

Though you’ll be afraid, keep your focus on the task at hand. Sure, you may thrash around a little bit (as anyone does when they’re first learning to swim), but if you just keep at it, chances are you’ll do just fine.

IMPOSSIBLE TASKS ARE THE ONLY ONES WORTH TAKING ON

When Aspiration set out to change the way people thought about their money, Andrei knew it would be a challenge. But leaders march in the face of resistance — even if the task seems impossible.

"I would say the impossible tasks are the only ones worth taking on. Of course, when you're trying to do something big and hard and different, there's going to be a lot of resistance. If it weren't the case, then somebody would've already done it. Fight your hardest when people are telling you that change is out of reach."

Though the challenge before you may seem insurmountable, the lesson here applies not just to our professional lives but also to personal aspirations. Exerting time and energy doing only things that have already been done means you miss out on your opportunity to make an impact with something the world has never seen.

LOOK OUT FOR SOCIETY, NOT JUST YOURSELF

Asking how each of us can make an impact on the world around us is part of what has made Aspiration a game-changer in the banking industry.

One of the fundamental ideas behind Andrei's Aspiration brand is that each of us has the power to change the world as consumers. "We have enormous power as citizens to cast a vote once every two years, or once every four years. And so we have even more power as consumers."

Andrei further explains that American consumers spend 36 billion dollars every single day and can spend their money in businesses that do good for their communities and the world, and avoid spending at companies that need to do better. That powerful impact drives Aspiration to create opportunities for consumers, providing banking services distinctly tied to global, environmental change.

"And my advice is maybe where we started. Jump into those battles, and jump into those great causes, and know you're going to be bloodied along the way, but get right back and keep on going."

Listen to the bonus episode to learn the important steps to building a meaningful career and how to get two sides to come together in a negotiation.

How to Start a Business (And When to Pivot)