The Power of Servant Leadership 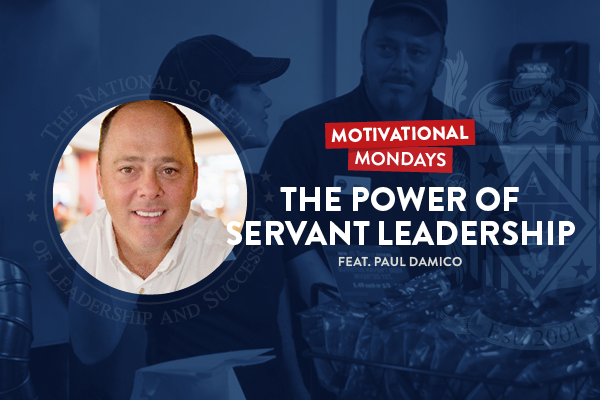 If you’re like millions of fans who watched Undercover Boss over the years, you’ll instantly recognize our next guest from Season 4 as the President of Moe’s Southwest Grill!

But today, Paul Damico is CEO of Global Franchise Group, which owns some of America's favorite brands like Great American Cookies, Marble Slab Creamery, and Round Table Pizza.

With more than 35 years of leadership in the food and hospitality industry, Paul sat down with NSLS to share some of his secrets to success — and the power of servant leadership.

THE WEIGHT OF LEADERSHIP

While many are enamored with the thought of leadership and being in charge — few of us truly know the day-to-day stress that leadership demands, until we walk in those shoes.

Leaders are decision-makers, a task of enormous pressure. Many times, that means knowing that the choices you make will impact — either negatively or positively, hundreds of team members' lives.

While all leaders try to make the best decisions with the information available, many times there are still a lot of unknowns. In 2020, just as Paul took on his new role as the CEO of Global Franchise Group, a global pandemic began to unfold. Paul didn't know if the pandemic would last 30 days, or 6 months, or 2 years. And with 1500 franchise locations across 16 countries, he was faced with an enormously difficult decision... shutter a large part of their company locations to save cash (but live to fight another day)… or hemorrhage money at each location in hopes that things would turn around in time.

He admits, though, during this time, sleep was rare. He even broke out in hives for four months due to the stress and anguish of laying off hundreds of people and closing half of his stores. It was a challenging time, but that’s what being a leader is: making the best decision possible with the information at hand, but having the courage and long-term vision to know how to work through the problems in front of you to come out stronger on the other side.

Though without an all-star team by his side, Paul admits, things would have turned out very differently.

Paul explains, "We start by recruiting the right people. And certainly, one of the things that the pandemic did for us was help us downsize and "rightsize" the organization. You hear that a lot throughout the industry, and it's not just the restaurant industry; you hear that across the board. And so every organization has in it some underperformers."

Acting decisively and knowing when to remove what's not working proved to be successful for Paul. Global Franchise Group reemerged less than a year later with nearly 100% of its operations intact.

WHAT TYPE OF LEADER ARE YOU?

For many successful leaders, there seems to be a single moment that shapes the type of leader they would become. For Paul, witnessing an act of generosity would forever define his own commitment to always lead with empathy and compassion.

Paul recalls a harrowing story years ago of his younger brother who was on the waitlist for a liver transplant — one that was desperately needed to save his life.

“...When that pager went off you had I think six hours to get onto the operating room table. And that was a 5-hour drive from Long Island to Pittsburgh — which was the only place that was doing liver transplants at that time.”

In what Paul describes as a miracle, the aerospace company where his father worked for 40 years intervened immediately upon hearing that one of their employees needed help to save his son’s life. Without hesitation, the CEO of Paul’s father’s company sent a corporate jet to transport his brother from Long Island to Pittsburgh for the life-saving operation, just in the nick of time. While this all took place over thirty years ago, it was a defining moment that shaped the kind of leader Paul himself would one day become.

Paul explains how that single moment paved the way for him to do business in a style he calls "servant leadership."

Reflecting further on the family incident with his brother that inspired him so greatly, Paul expresses, "I've always felt since then… I call it servant leadership — whether I am the President or the CEO, servant leadership is part of my DNA as a leader. So when I started to see how that happened with my father, this is something that is above and beyond. You don't ask for it, it's just given, and someone's there to help you. And that's the way I run my day-to-day now in the companies that I run."

Listen to the bonus episode to learn more about what keeps leaders motivated and what traits Paul admires most in other great leaders.

Connect with Paul on LinkedIn

What Is Servant Leadership and How to Apply It

Many people who hear the term ‘servant leadership’ for the first time are confused. Servants aren’t thought of as leaders and leaders aren’t usually supposed to be servants. However, this seeming contradiction is actually why the name was chosen.

For most of history, leadership was defined by title and wealth. People were born into leadership and led from a hierarchical position.

Luckily, theories and practices like servant leadership have proven that anyone can be a leader and true leaders are rarely defined by title or wealth. In fact, often the best leaders are those who spend time serving others to empower them, regardless of their status or position.