Using Gratitude and Kindness as Tools for Success 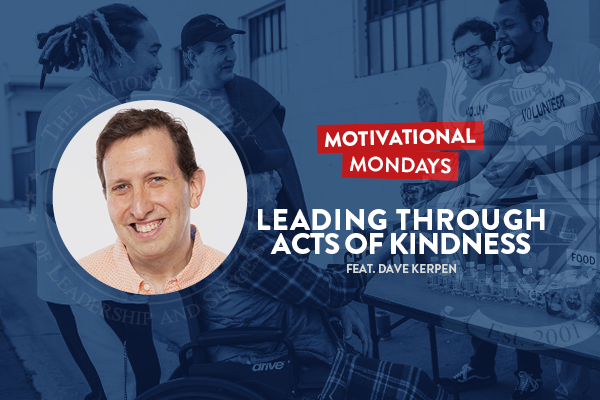 How often do you wake up in the morning thankful for all the things you have in life? This week's Motivational Mondays guest Dave Kerpen discusses how thankfulness and gratitude are the keys to living a more content and successful life.

Dave, often described as a "serial entrepreneur," is a New York Times bestselling author, a global keynote speaker, and a former contestant on the reality show Paradise Hotel. In a candid conversation about attributes of outstanding leadership, Dave shared his belief that how we treat others significantly impacts what we get back from life in return.

THE POWER OF BEING LIKABLE

Very often, many successful leaders will share their "secrets" of great leadership. Of course, there is never a shortage of suggestions, such as  building a supportive team. But for Dave Kerpen, there is an often-overlooked component that makes all the difference: Likability.

Building relationships with kindness, respect, and compassion is an essential people skill that translates to good business. Dave quotes Maya Angelou to support this notion, "People won't remember what you said, but they'll remember how you made them feel."

He shared a remarkable story that changed the course of his life. Dave was having a bad day when he made eye contact with a homeless man. As the man approached him to ask for money, Dave decided to offer up a dollar or two, or perhaps some loose change, but discovered he only had a $50 bill. After a moment of uncertainty, contemplating how he should handle the situation, Dave decided to give him the $50.

He reflects  on the joy he brought to the homeless man, who responded as if he had won the lottery. This also immediately changed Dave's mood for the better. The rest of his day was positive. He even attributes this change in mindset to a successful business pitch later that afternoon, where he landed a new client.

This experience puts Maya Angelou's famous quote in motion, and it's a mantra Dave believes — because he knows it works.

KNOW THE VALUE YOU CAN BRING TO OTHERS

Rather than being hellbent on "asking for what we want, being assertive, and going for stuff," Dave suggests we could be more productive if we instead ask, “what attributes do I have to help others achieve a goal or need?”

Looking back on his experiences and what he's learned over the years , he explains, "The more we help others feel heard and feel understood, and then help them get what they want and need, the more they are going to want to help us get what we want and need."

It's a paradigm shift that requires us to be more collaborative and less focused on only our desires. In a society that sometimes perpetuates a culture of self-importance, the counterbalance is to try and listen to each other to gain a better understanding of other people's perspectives. Life is not a one-man/one-woman show, so ask yourself, what can I do, what skills do I have to help someone get closer to their goals today?

LISTEN NOT TO REPLY BUT TO UNDERSTAND

Dave's new book, The Art of People: 11 Simple People Skills That Will Get You Everything You Want shares 11 categories and 53 subcategories that revolve around the power of people skills. Of all the skills he covers, he focuses closely on the collaborative skill of listening. As Dave points out, most people aren't good listeners even though they think they are. We are quick to reply, but rarely listen deeply.

A listening exercise Dave recommends is "mirroring," a concept he teaches as “Listening 101 — Repeating back what the other person said with a special attention to emotions that we're hearing." As an example, he shares, “Let's say you're having a tough day, and you say to me, Man, I'm so annoyed. I'm having a lousy day. I could say, Well, how can I help you have a better day?  — but that wouldn't be listening. Or, I could say, Man, I'm having a sh**tty day too— but that wouldn't be listening either; that's making it about me. But if I said, Wow. Oh, man. It sounds like you're having a horrible day, and you're really annoyed. — Now, I'm demonstrating to you that I am absolutely listening to you." In that instance, that person would feel like you understand where they are coming from and that you can relate.

If we all can get just one skill down, Dave says it's listening better.

FIND A WAY TO STAND OUT FROM THE CROWD

Dave concludes the conversation by offering some advice to graduating students entering the competitive job market. A key takeaway is identifying your unique individual traits and using them to stand out and make an impression. Again, Dave can point to personal experience to back up this advice.

The color orange is a significant part of Dave's personal brand. It's a color that evokes happiness, warmth, and well-being. Whether it be a shirt or footwear, he's always wearing orange. This stems from his days as a young entrepreneur. Dave recounts once attending a seminar featuring a renowned fortune 500 CEO. During the networking segment of the event Dave was one among many in a sea of young, hungry entrepreneurs, trying to gain access to the CEO. He had all but given up hope on possibly pitching his new business idea.

But suddenly, he heard the CEO through the crowd belt out, "I gotta meet the guy with the bright orange shoes!" That critical point of visual distinction made all the difference, and Dave wound up meeting the CEO, pitching his idea and landing a $250,000 check for his business.

Additionally, Dave encourages young college students to abandon doing things as they've always been done and instead to think outside the box, while assessing how they can genuinely add value for the person or business at the other end. You have to just keep the faith and believe you can achieve what you set out to do. As Dave advises, "No matter who you are, no matter who they are, just go for it and always believe it's possible."

Listen to the exclusive NSLS members-only bonus episode to learn how detailed scheduling helps manage multiple tasks and why it’s okay to say “no” when you don’t have the bandwidth.