Lessons in Leadership and Resilience from Lindsey Vonn 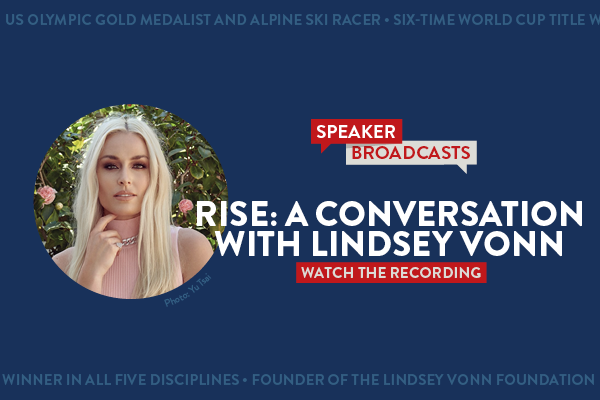 When Lindsey Vonn was nine, she told her father that her dream was to be an Olympic gold medalist. Instead of telling her how difficult the journey would be, her father explained what steps she would have to take, instilling the importance of goal-setting from an early age.

In our exclusive Speaker Broadcast with the most decorated female skier of all time, Lindsey discussed her childhood dream and the path she took to eventually reach the top of the mountain.

GROWING PAINS ARE PART OF THE PROCESS

During the broadcast, Lindsey talked about her path to athletic excellence and the battles she faced on and off the slopes, detailed in her new memoir Rise: My Story. She shared the ups and downs in an impressive career that culminated in her childhood dream coming true, but not without obstacles along the way.

“Adversity taught me the most about being a leader and about being a better person,” she said, admitting that tough times are what define you in the end. When asked what advice she would give to her younger self, her answer was an NSLS first that only further illuminated the importance of failure to succeed.

LESSONS FROM A LIFE SPENT IN THE SPOTLIGHT

In this broadcast, Lindsey discusses: