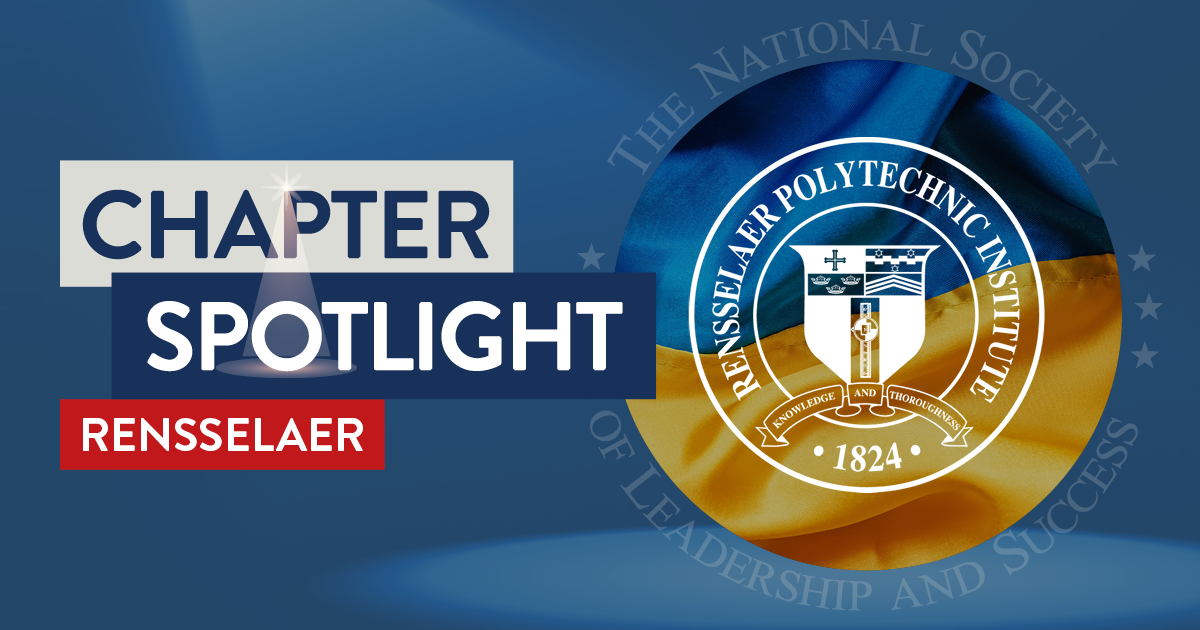 On February 24, Russia initiated an unprovoked attack on the sovereign nation of Ukraine. At The National Society of Leadership and Success (NSLS), we stand with the Ukrainian citizens and with the global community in its denouncement of Russia's senseless invasion.

We are proud to publish our first Chapter Spotlight on a chapter that is living our mission of building leaders who make a better world—specifically by helping in the Ukrainian relief effort.

The Rensselaer Polytechnic Institute chapter in Troy, New York knew they couldn't stand by as they watched this devastation from afar, especially with such a robust Ukrainian population in the region.

"As an executive board, we needed to take action."

The Capital Region of New York is home to thousands of Ukrainian-Americans. Instead of sitting idly by, the RPI chapter led by Chapter President Deanna Pizzimenti and Chapter Advisors Graham Knowles and Christine Allard, put leadership into action to make a real difference.

The chapter leaders cited both the NSLS mission but also RPI's, which states, "Why not change the world?" In this spirit, they decided to help raise donations for Ukraine.

They accomplished this by partnering with the local community. An incredible grassroots relief effort has been underway by local Ukrainian churches and the Capital District Branch of the Ukrainian Congress Committee of America (UCCA), a national charitable organization working to aid the people of Ukraine since 1940.

Sadly, Ukraine's past is mired in many conflicts. The most devastating was the Holodomor, a famine engineered by Joseph Stalin that killed millions in the 1930s. Putin’s war crimes parallel those of Stalin. Because of this devastating past, great organizations have been prepared for history to repeat itself and aid in any way possible.

The RPI chapter of the NSLS was also ready.

Stepping Up When it Matters Most

One might assume the biggest need for refugees fleeing a war-torn country would be for items like clothing, food, or bedding. However, the leaders at RPI quickly learned that the needs fell under a much more serious category.

In fact, when they arrived at the Saint Nicholas Ukrainian Orthodox Church in Troy, the woman who greeted them said they could only accept medical supplies because “we are at war.”

The haunting truth of this statement only makes this chapter's efforts that much more inspiring. Also inspiring were the walls lined with other boxes with shipping addresses for Ukraine, donated from other groups and individuals with the same mission.

The RPI chapter ran the collection efforts for one week to meet the shipping timeline of the local churches, setting up an area on campus to accept donations. They also created an email campaign to staff and members and hosted a Speaker Broadcast on March 15 to help publicize their efforts.

On Friday, March 18 they had collected close to $700 in medical supplies. If that was difficult to accomplish, delivering those items would be a much harder experience.

As they entered the church to the mournful sounds of prayer, they had a close look at the struggle Ukrainians are facing. Coming face-to-face with such a harsh reality is an unavoidable aspect of humanitarian efforts like this one.

We're happy to see the RPI NSLS community putting leadership into action to help those on the frontlines of this senseless war.

Looking to make a difference? Read "15 Unexpected Benefits of Volunteering That Will Inspire You" and start thinking about ways you can connect with your community.