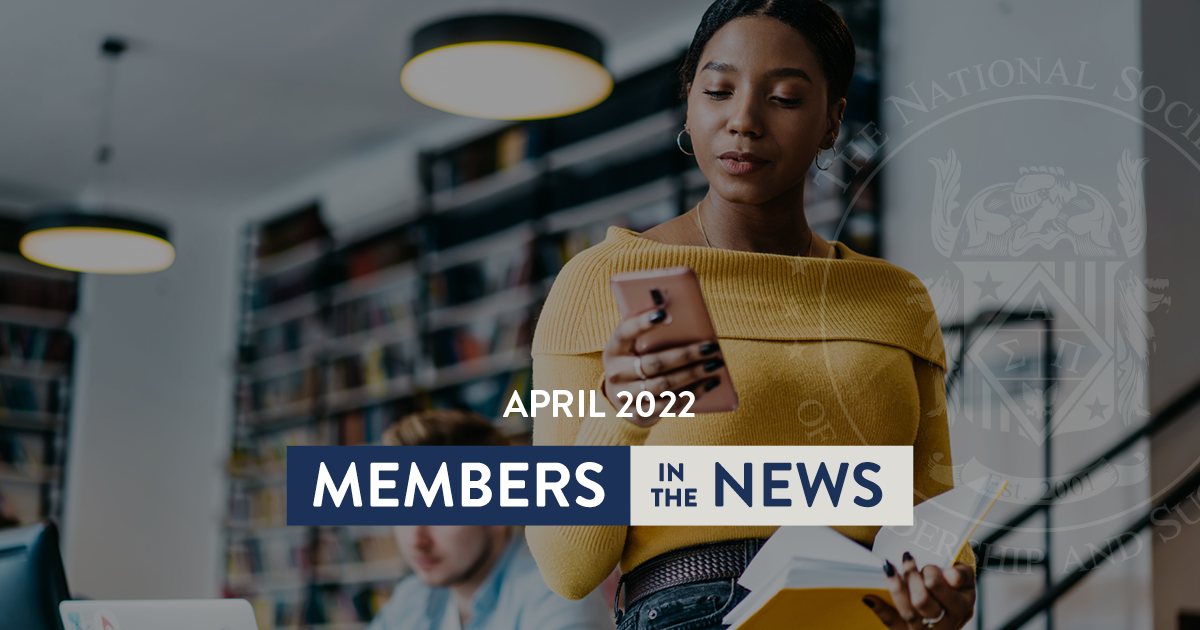 Our members continue to impress in April. Every month, we highlight inspiring stories that represent everything the NSLS stands for. Our members come from many different backgrounds but they all rise to become leaders. Check out the stories below that showcase them utilizing their leadership skills.

Our mission at the NSLS is to Build Leaders Who Make a Better World. Our members participate in social events, volunteer for charities, and take part in a wide range of community service initiatives. Upon graduation, they apply the interpersonal skills they've acquired to start businesses, pursue promotions, and more.

It's hard to find an award Tionna Taite hasn't earned during her time at the University of Alabama. She was recently named Miss Black Alabama USA 2022, but that's only the beginning of her long list of accolades and involvement on campus.

The NSLS Chapter President's activism led to her being named recipient of the 2021 William P. and Estan J. Bloom Award, one of the University of Alabama’s highest honors. She earned this by being a leader for the Black Voices Rise panel, the Discerning Diverse Voices Symposium, and the Diversity, Equity, and Inclusion Recruitment Event. As the Diversity, Equity, and Inclusion Chair of the Alabama Forensic Council, she educates people on marginalized groups and current disparities in society.

Besides being a regular presenter on campus and writer for her blog, Becoming Black Excellence, she also began the first Black student-led magazine at the university. She named it Nineteen Fifty-Six for the historic year that the first Black student officially enrolled. As the founding Editor-in-Chief, she led a team of 60 talented students, generated 23,884 total digital magazine views, and raised over $30,000 in donations.

Read the Full Story at the Tuscaloosa Thread >>

Andy Alfonso, Miami Dade College, arrived in America five years ago from Cuba. Now, he's graduating from Cornell University with honors and has been accepted into Princeton University's graduate school, where he'll pursue a doctorate in literature.

This quick learner became a fast leader. At MDC, he received the prestigious Board of Trustees Scholarship and the President's Volunteer Service Award for tutoring his peers in math, chemistry, physics, and English.

His other leadership roles include acting as Chapter President of the MDC chapter, and working with the Harvard-MDC Latino Leadership Retreat and the Honors College Salzburg Seminar. He also helped with fundraisers, including TECHO, which helped build homes in impoverished areas, and the group Knit Into Love, which helps people battling cancer.

Cornell's Merrill Presidential Scholars Program honors the university’s most outstanding graduating seniors. Andy will receive a bachelor's in literature from the school before heading to Princeton to continue his education.

Albanian native Entela Ilirjani came to the US as a student 24 years ago, but took time off to raise two children. She always dreamt of getting back into the classroom, but made raising her children a main priority.

The Berkeley College chapter member finally enrolled again in 2018. She not only had to learn about technology and all the changes to higher education, but she also continued working Monday through Friday as a medical assistant in a doctor’s office in downtown Brooklyn.

She is a self-proclaimed "learner by experience" and dove right in, studying side-by-side with a completely different generation two decades younger than herself. In 2020, she completed her dream by earning a bachelor's in business administration in health services management.

This President's and Dean's List recipient isn't slowing down any time soon. She’s now enrolled in Berkeley College's MBA program. When she graduates, she plans on putting her leadership skills into action by giving back to her community as a school or healthcare administrator.

Kevin Eppes is the recipient of the Spring 2022 President’s Award for Academic Excellence for the College of Science and Mathematics at Valdosta State University.

He also used his leadership skills to volunteer, helping low-income residents through the South Georgia Partnership for Health Dental Clinic, as well as the homeless through Lowndes Associated Ministries to People, Inc. (LAMP). He also hosted dental fairs at elementary schools and educated students about proper dental hygiene, all while conducting academic research and earning a range of accolades and awards.

They include being named a Georgia HOPE Scholar, winning the 2022 Biology Senior Award, and earning the Hinman Dental Society of Atlanta Scholarship. After graduation, he plans to enroll in the Dental College of Georgia at Augusta University.

NSLS Member Bets on Education for Better Life; Has Bright Future in Politics

Daphné Moore, Rowan-Cabarrus Community College, was working tough jobs and barely paying the bills when she decided to go back to school.

She enrolled in the high school equivalency program at Rowan-Cabarrus, completing her diploma in 2013. From there, she went on to graduate with honors with an associate’s degree in business administration and eventually a bachelor’s degree in political science with a concentration in public affairs from Meredith College.

During her studies, she served as president and vice president of the Black Student Union, president and senate chair for Women in New Goal Setting (WINGS), executive chair of the Student Government Association Executive Board, and as public information officer and vice president of the Rowan-Cabarrus Student Government Association. She also was the first Rowan-Cabarrus student to graduate as a Scholar of Global Distinction under a partnership between the community college and UNC World View.

She graduated as part of the first cohort of the Meredith College Voices of Change Political Institute, which focuses on building greater representation for Black women and people of color in office. Her goal is to run for office herself, with her eyes set on a seat on the North Carolina Council of State.

Hanine Mansour-Fakih, University of Phoenix, has been recognized as a Professional of the Year for 2021 by Strathmore’s Who’s Who Worldwide for her outstanding contributions and achievements in the field of educational consulting. Full Story >>

Jesse Keaton and Christopher Hernández Carrillo of the Surry Community College chapter have been recognized as 2021-22 Student Ambassadors and SGA Members. Christopher is also the secretary of the school's NSLS chapter. Full Story >>

Autumn Garrett, Metropolitan Community College Blue River, has been selected as a Rotary Student of the Month at William Chrisman High School. The chief editor of her school's newspaper hopes to attend the College of the Ozarks to study English and journalism. Full Story >>

Tanisha Burke-Wormley, University of Arkansas at Little Rock, was recently a featured guest on The Balanced Parent podcast. The episode, "Supporting Yourself Through Hard Times with Tanisha of @MedicalMomsofNICU," gave her a platform to discuss her resilient story raising a son with chronic kidney disease. Full Story >>

Yannick Bopda, University of Maryland Global Campus, overcame homelessless and has been  recognized for his achievements in his medical studies as he works toward becoming a gastrointestinal surgeon.
Full Story >>

Sarah M. Henderson, National Online Chapter, has been named the new Public Health Director of the Haywood County Health and Human Services Agency, bringing her 16 years of nursing experience and staff development to the position. She’s currently pursuing a PhD in Nursing Leadership at the University of Southern Mississippi. Full Story >>

JT Pentz, Juniata College, has been named to the Centennial Conference Academic Honor Roll for the second year in a row. The Dean's List student is a wide receiver on the Juniata College football team. Full Story >>

Sarah Guajardo, University of Texas at San Antonio, has been recognized as a 3Star Teacher by 3News, for inspiring ninth graders at Our Lady of Perpetual Help Catholic School in Corpus Christi, TX as a physical education coach and math teacher. Full Story >>

Rhode Jeanniton, Caldwell University, has been recognized by her school for her passion in healthcare administration. The Dean's List student is the secretary of her NSLS chapter and has held various leadership roles on campus. Her goal is to become a hospital CEO. Full Story >>

Nicole Coakley, Northcentral University, was recently interviewed by Pay for All for her expertise regarding pay equity obstacles for Black women. The assistant director of the Springfield College Center for Service and Leadership has over 20 years of experience in early education. Full Story >>

Veronica Townsend, William Woods University chapter, landed a coveted internship with ESPN. The current graduate student at the University of Missouri's School of Journalism was one of 10,000+ applicants for the highly selective summer internship program. Full Story >>

Sarah Padilla, Stevenson University, is the recipient of the 2022 Geraldine and Sam Dell Scholarship for Character and Excellence in the Sciences for her academic achievements and her involvement on campus and in the broader community. Full Story >>

Craig Spell, High Point University, has been recognized as a leader on campus for excellence inside and outside of the classroom. The business administration major is a regular Dean's List student and holds many leadership roles on campus, including student government representative for the American Marketing Association. Full Story >>