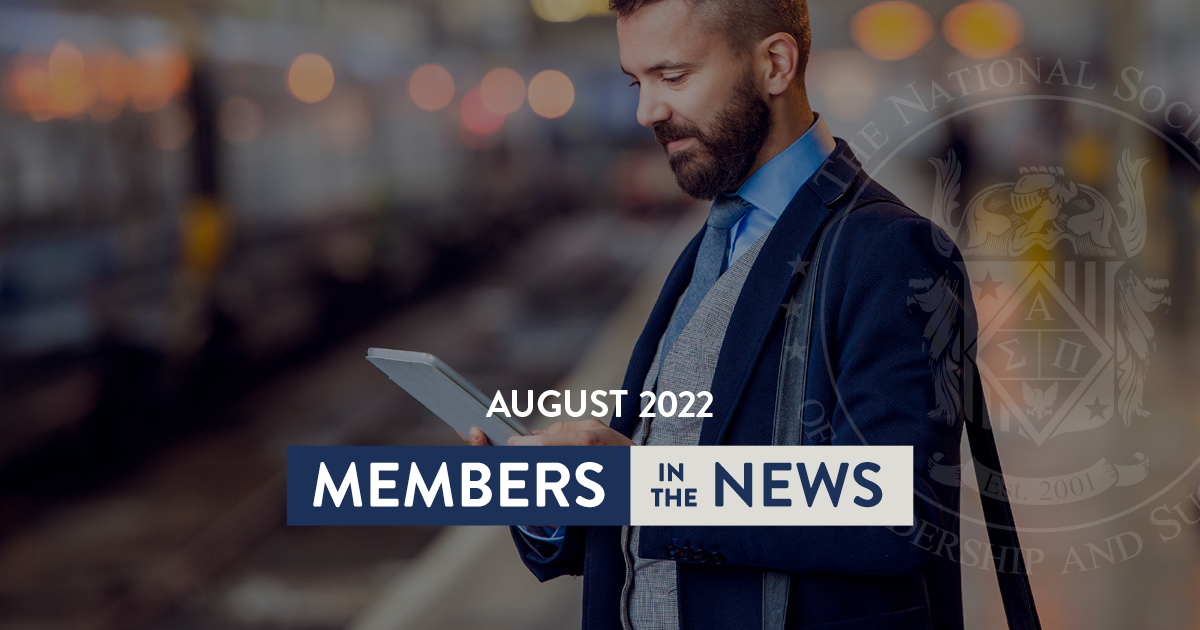 Even at the tail-end of summer, our members continue to make headlines using their leadership skills. Check out their inspiring stories below.

Our mission at the NSLS is to Build Leaders Who Make a Better World. Our members participate in social/volunteer events, and take part in a wide range of local service initiatives. Upon graduation, they apply the interpersonal skills they've acquired to start businesses, pursue promotions, and more.

Senior Nominated for 2022 NCAA Woman of the Year Award

She was named to the President's List three times and SAU's Most Outstanding Student of the Year for Political Science, History, and Geography students. She served in the Student Government Association, was vice president of her school’s Active Minds organization, treasurer in the Pre-Law Club, and many others.

She's also earned many accolades in her sport, including being nominated for SAU's Most Outstanding Women's Track Athlete of the Year.

Read the Full Story from Banner-News >>

Samantha Cioni, West Virginia University, will receive $10,000 a year toward her tuition as she pursues graduate studies to become a veterinarian. The scholarship from the H.E. “Doc” Kidder Memorial Trust is given to a student who excels academically and demonstrates leadership.

The WVU Honors student completed her credit requirement for veterinary school in only three years. On campus, she was involved in the WVU Western Equestrian Team, the Pre-Veterinary Club, where she served as treasurer, and other organizations.

She has hands-on experience working at an emergency animal hospital during the summer. The animal and nutritional sciences student will use her scholarship to attend the College of Veterinary Medicine at Long Island University to further her education. She plans on finding work in emergency and critical care veterinary medicine.

Young Mother Goes Back to School and Named Valedictorian

Savana Paciulli, Holyoke Community College, went from a struggling student to valedictorian after seven years away from the classroom.

At a young age, Savana was diagnosed with dyslexia, ADHD, and other disorders, but she spent much of her life ignoring it to avoid the stigma and fit in better with her peers. This made her classroom experience difficult and she battled anxiety to the point where she would drive to campus and sit in the parking lot, unable to get out of the car.

Her second attempt at college was different. She earned an associate degree in math with a 4.0 GPA and was named valedictorian. She achieved this by embracing her true nature as a neuro-divergent person. She was accepted into HCC's National Science Foundation STEM Scholars Program, which offers financial aid, mentorships, research opportunities, community service, and internships.

At HCC, she co-founded the Neurodiversity Club, served on the Student Senate, and organized STEM events with local high schools and community organizations like Girls Inc. and the Holyoke Boys & Girls Club. She will continue her studies next month at Smith College and hopes to start her own data science company following graduation.

Read the Full Story from WWLP >>

Sheila Medina, Western Connecticut State University, came to the US from Peru at age 15. She quickly learned English and graduated from Norwalk Community College with an associate degree in accounting.

Before her studies at WCSU, she put her accounting skills to use by preparing tax returns for a financial firm as their only bilingual accountant. At school, she helped other students by becoming a tutor, completing her studies as a double major and debt free. She also found the time to act as president of the WCSU Accounting Society.

During her time at WCSU, she held internships with accounting firms, which led to her sending an application to Deloitte, a major professional services company. She received an offer to join their risk and financial advisory department as an analyst.

Besides being an inducted member of the NSLS, she also earned an NSLS scholarship that would have taken her to Italy. The trip was canceled so she used the funding to shadow a researcher in Mexico, which allowed her to conduct work in the field while also helping launch a Spanish ecotourism initiative called Fondas de Pueblo. Outside of her studies in anthropology, she found success as a writer, publishing a novel rooted in her and her brother's experiences together, Al Borde de un Viaje.

Alex J. Wade, Northwestern State University of Louisiana, was commissioned as a second lieutenant in the US Army, after ranking in the top five percent of her platoon during Cadet Summer Training. Full Story >>

Mac Bagwell, University of New Mexico, has been named executive director of the elections commission, protecting the integrity of all student elections. Full Story >>

Taylor Studniski, National Online Chapter, was featured for her leadership instruction, taking what she learned at the NSLS to deliver leadership lessons to young people. Full Story >>

Ekaterina Vasilyeva, Columbia Southern University, has been recognized for her success in property management and real estate, which she attributes to her communication skills. Full Story >>

Ryan Sagedy, Elizabethtown College, has been recognized for his excellence in music education through his work as an elementary school music teacher, band director, and chorus director. Full Story >>

Austin Gray, Western Governors University, has been recognized for her excellence in business management through her experience as a senior business operations manager and healthcare ecosystem subject matter expert. Full Story >>

Zagora James, Alabama State University, was highlighted for her achievements in the classroom and involvement on campus through mentoring programs and community service projects. Full Story >>