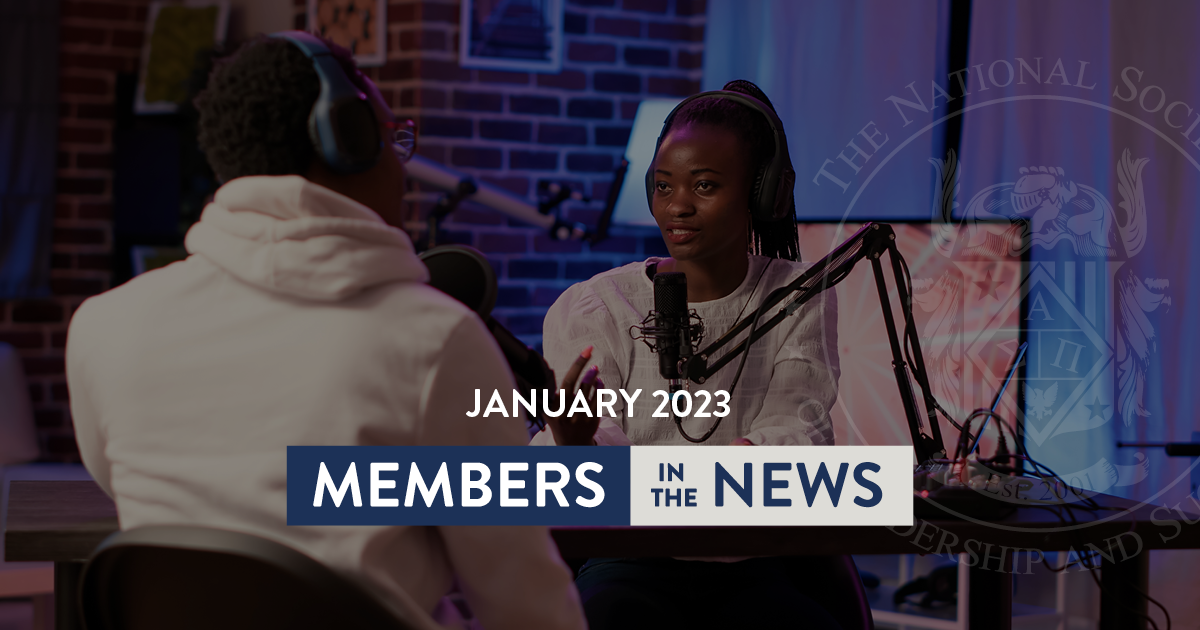 As we transition into the new year, we're continuing to share the highlights of NSLS members' achievements and accomplishments. We hope you find their stories as inspirational as we do.

Our mission at the NSLS is to Build Leaders Who Make a Better World. Our members participate in volunteer events, and take part in a wide range of community service initiatives. Upon graduation, they apply the interpersonal skills they've acquired to start businesses, pursue promotions, and more.

Samantha Gatewood Douglas, Arkansas State University, will be recognized as this year’s Three Rivers College Alumni Star at a reception on February 4. This award recognizes a notable alumni of TRC with significant civic and professional accomplishments, and an ongoing connection to the institution.

Samantha earned a business administration degree from TRC in 2016 and graduated with honors. While at TRC, she also served as a tutor and a peer mentor. She then obtained her bachelor’s in business management from Arkansas State University in 2018.

While at ASU, Samantha was on the dean’s list and the chancellor’s list. She also received the “Who’s Who Among Students in American Universities and Colleges'' award. She played on the basketball team while maintaining a high GPA and was honored with the NJCAA Exemplary Academic Award. Samantha currently works at Farm Credit Southeast Missouri.

Activist and National Louis University graduate Demetrius Jifunza was featured on Legal Aid of Manasota’s Justice Matters radio show, where he discussed voting rights, voter fraud arrests, and the recent passage of Amendment 4, which restores voting rights to more than one million people who were previously convicted of felonies.

Demetrius is currently working toward his doctorate in counseling education and supervision. He’s a registered mental health counselor intern at CAN Community Health. He’s been active in leadership positions with the Sarasota chapter of the Florida Rights Restoration Coalition, a group dedicated to ending the disenfranchisement of people with criminal convictions.

Demetrius also holds leadership positions with the Sarasota County Branch of the NAACP, the Sarasota Ministerial Association, and the criminal justice committee for Sarasota United for Responsibility and Equity (SURE).

Katie Gergits, a DeSales University elementary education student, was selected to pose a question during the NSLS Speaker Broadcast featuring Kelly Ripa. The question she asked was: “What advice do you have for anyone who struggles with public speaking?”

Ripa’s response was to trust that her audience wanted to hear what she said based on her background and role—whether that would be students in her future classroom or professional colleagues in a meeting.

At the end of the broadcast, Ripa participated in a game called “How Jersey are you?” and ended up winning $1,200 in scholarship money for Katie.

ECU Grad Student Profiled by School for His Achievements

Teandrea Wilkins, who’s on track to graduate from East Carolina University with a master’s in sports management, was recently profiled by ECU as a student of note. After graduation, he plans to pursue a career as head coach in track and field programs or in sports administration, with an ultimate goal of leading a Division I program.

Teandrea began his studies after high school at North Carolina Central University. He then transferred to ECU where he earned a bachelor’s degree and participated in such campus groups as the ECU Collegiate 100, ECU Ambassadors, and the student advisory council.

He is currently working on earning his graduate degree and works as a graduate assistant at ECU Campus Recreation and Wellness.

Read the full story at ECU >>

The American Heart Association has tapped Xavier University of Louisiana junior Brayanna Jones to participate in its Historically Black Colleges and Universities (HBCU) Scholars program. The Scholars Program is designed to address the racial disparities in US medical school attendance and the medical profession itself, where only eight percent of medical students and five percent of physicians are African American.

Brayanna is currently pursuing her bachelor’s in biology at Xavier. She has plans to continue her medical training after graduation and work to diversify the provision of healthcare services for local communities.

In addition to the NSLS, Brayanna is a recipient of an academic Valedictorian scholarship and has been named to the dean’s list.

Read the full story at the American Heart Association >>

Joy Jarriel, Indian River State College, was profiled as a recent graduate of note. Joy earned her bachelor’s in organizational management, graduating a semester ahead of schedule.  Full Story >>

Analisa Quinonez, The University of Texas at El Paso, was named the Sun Queen for the 2022-23 Sun Court as part of the Sun Bowl festivities for the city of El Paso. Full Story >>