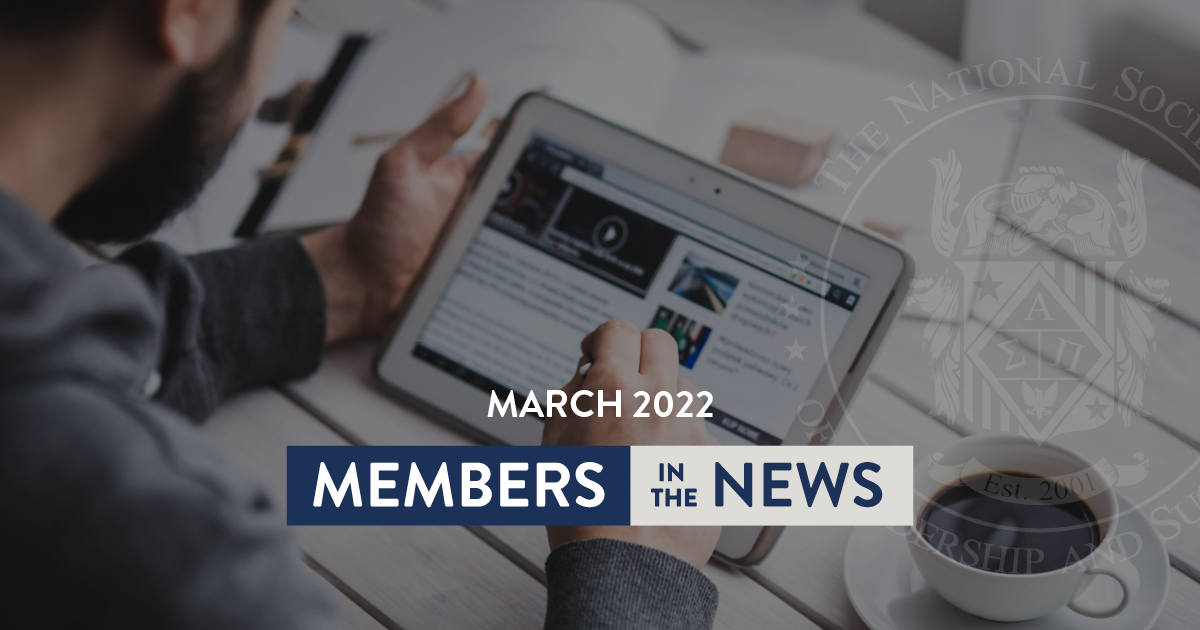 It’s March madness and we’re marching right into some amazing news headlines that our members have made throughout the month. Check them out below. Every month, we bring you inspiring stories of our members being recognized for their exemplary leadership skills.

Our mission at the NSLS is to Build Leaders Who Make a Better World. Nationwide, our members participate in social events, volunteer for charities, and take part in a wide range of community service initiatives. Upon graduation, they apply the interpersonal skills they've acquired at the NSLS to start businesses, pursue promotions, and more.

Ryan Luurtsema from Stockton University has been included in Marquis’ Who's Who for his service helping veterans.

Besides a long list of accolades, including being named 2021 Veteran Champion of the Year in Higher Education, Ryan is especially proud of developing an educational transition program. The Veteran and Military Resource Center has proven to be a pillar to the Ocean County community, providing programs to help military members transition to civilian life and become leaders in their communities.

He established other initiatives, including Veterans' Voices, Veterans Engaging Teachers, and V.E.T.S, providing broadcast opportunities to organizations dedicated to the same cause, and other holistic transnational advocacy to get veterans what they need as they set out to achieve their goals.

Ryan earned a bachelor's in hospitality, tourism, and management from Stockton University and graduated from Colorado State University Global with a master's in organizational leadership in project management. At Stockton, he was the student president for the Student Veteran Organization and held numerous leadership roles ever since.

The former midfielder on the Washington College women's soccer team earned her fair share of accolades during her time as an undergrad. Recognized as a three-time All-Centennial Conference selection, she was also named the 2018 Centennial Conference Women's Soccer Scholar-Athlete of the Year, while being named to the Scholar All-Region First Team. In 2019, she received the Eldridge Eliason Award by the athletic department.

As a three-year captain for the Shorewomen, she made time to earn Dean's List and volunteer with Habitat for Humanity, where she participated in home builds with other students during their spring break.

She earned a bachelor's in biology with a concentration in physiology, minor in psychology. She is currently enrolled in the University of Delaware's doctorate program for physical therapy with plans on working as a PT for a professional team or university.

New Jersey’s Chatham Township welcomed two new female police officers to their all-male department, including Jessica Cortez of New Jersey City University. This is the first time in three years a woman has been sworn into the 23-officer department.

Before joining the force, Jessica worked as a security officer for the private security firm SSC and was a fitness instructor with Jersey Strong. She was awarded the Seal of Biliteracy in Spanish, earned her associate's in homeland security studies from Middlesex Community College, and bachelor's in national security studies from NJCU.

To break barriers, it took more than just her extensive background and studies in the field. She had to go through various interviews, a rigorous background check, a physical fitness test, and will begin a 21-week training at the Morris County Police Academy.

Read the Full Story from Patch >>

Kimberly Casarez-Haro from the University of Texas at Arlington has been promoted to Chief Financial Officer of Goodwill North Central Texas. This comes after nine years at the organization, most recently as Vice President of finance.

She began her career at Goodwill as a retail assistant manager, and then as accounting specialist and senior accountant. As CFO, she’ll lead the administrative, financial, and risk management operations of the company. Previously, she served as financial controller of Tarrant County Housing Channel, a nonprofit dedicated to revitalizing distressed neighborhoods increasing access to affordable housing for those with low to moderate income.

She earned a bachelor's in business administration and a master's in accounting from the University of Texas at Arlington, where she graduated with honors. Always active in the community, she volunteers for the Union Gospel Mission of Tarrant County tutoring homeless children.

Mikhai's mother is an AFGE member, a union steward, and representative of the International Brotherhood of Teamsters (IBT), making him eligible for the award. He earned the honor through hard work and always getting involved. The Union Plus Scholarship Program awards scholarships based on outstanding academic achievement, commitment to the values of organized labor, financial need, and personal character.

The homecoming king completed a dual-credit course at Northwest Missouri State University while still in high school and was a member of his high school's diversity council. He was also a student athlete on the varsity basketball team and track & field, and has participated in various volunteer initiatives.

Mikhai is currently a Dean's List student studying business management with hopes of starting his own business.

Read the Full Story from AFGE >>

Dr. ShaYanna Mungo Whitaker from University of Phoenix has been included in Marquis’ Who's Who for excellence in project management and a successful career using her leadership skills as a change facilitator and IT security consultant. Full Story >>

Christan Rainey from Columbia Southern University and CEO of M.A.D (Men Against Domestic Violence) was appointed to the Board of Selectors of Multiplying Good, a leading nonprofit focused on fueling personal growth and leadership through public service. Full Story >>

Teresa Draves from Washington College is a two-time Centennial Conference Academic Honor Roll selection for her excellence on the Shorewomen swim team, and has been highlighted by her school for her academic and athletic achievements. Full Story >>

Jalen Hubbard from Indiana University Northwest has been named a 2022 Building Bridges Award winner, receiving $500 from the MLK Student Organization Grant. The award goes to a student who captures the spirit, vision, and leadership of Dr. Martin Luther King, Jr. Full Story >>

Caleigh Martin from Del Mar College has been named a finalist for the Joe Barnhart Scholars Award, given to students for academic achievements and contributions in civics, religion, the humanities, and business. The award provides up to $50,000 in scholarship money. Full Story >>

Elizabeth Howard from Hocking College will become the first generation in her family to attend college and earn a degree, battling adversity to earn her associate's in accounting and financial services. Full Story >>

Danielle Wallace from Colorado State University Pueblo has been named the Zonta District 12 winner for the Jane M. Klausman Women in Business Scholarship, which she will put toward an MBA with an emphasis in accounting. Full Story >>

Jewel Theiler from Louisiana Tech University has been recognized by her school for academic excellence in supply-chain studies. The Supply Chain Club member is leading the charge for sustainable methods for supply-chain management and recently landed an internship with FedEx. Full Story >>

Nancy García Villa from Surry Community College has been recognized as a LatinxEd 20 Under 20 recipient and is now an NC State Park Scholarship finalist; a four-year scholarship that includes tuition and fees, room and board, books, supplies, travel, and personal expenses. Full Story >>

Alyssa Schiaffino from University of Southern Mississippi received the William E. "Bud" Kirkpatrick Scholarship from the Pine Belt Chapter of the Public Relations Association of Mississippi (PRAM). The $500 award goes to communications students who demonstrate potential outside of the classroom. Full Story >>

Giana Levy from Clark Atlanta University is the first recipient of the 2021 HBCU Scholarship of $5,000. The Dean's List student earned this recognition through academic excellence and being active in student and community initiatives, including volunteering at women’s clinics and the Department of Veterans Affairs. Full Story >>

Landon Kea from Mesa Community College has been named to the 2022 All-Arizona Academic Team, earning a $1,000 scholarship. This recognition is given to students who demonstrate intellectual tenacity and leadership beyond the classroom. Full Story >>