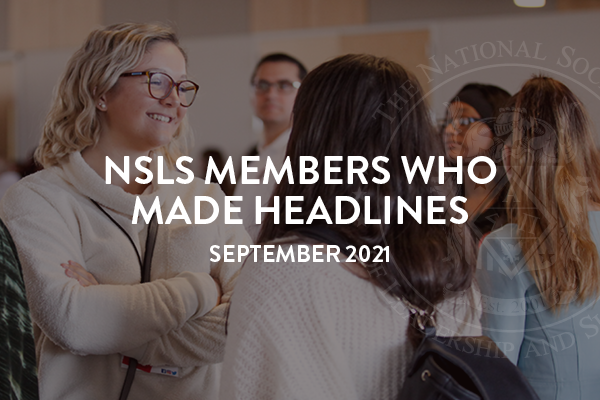 Once a month we bring you the inspiring stories of our NSLS members as they use their leadership skills to accomplish their goals.

Our mission at the NSLS is Building Leaders Who Make a Better World. Nationwide, our members participate in social events, volunteer for charities, and take part in a wide range of community service initiatives. Additionally, upon graduation and entering the workforce, members apply the interpersonal skills they've acquired to start businesses, pursue promotions, and continue applying what they learned as NSLS members!

Raven Hilden of the University of Phoenix chapter has been awarded the Fannie Griffin-McClendon Scholarship for her dedication to volunteer work. She will receive the $5,000 scholarship, which is awarded to military families, for her work with veterans and active military members.

Raven started MilVet in 2016, a nonprofit organization that helps military veterans, active service members, and their families by delivering boxes of food, hygiene products, and special requests that range from a specific Mexican candy for an airman from Tucson to duct tape and tinfoil for a unit overrun by ISIS.

As a military spouse, she came up with her nonprofit idea for a course at The University of Phoenix and has since made it a reality. She continues to help active service members and veterans with her efforts by sending out packages every month with letters of thanks attached to every single one of them.

Crespo, recently accepted into the five-year architecture program at New York Institute of Technology (Manhattan), has already taken her skillset beyond the classroom by getting involved in her local community. She organized the New American Dream Foundation, a fundraiser to help during the COVID-19 pandemic to raise awareness and provide meals to people in need. She looks forward to a career in architecture helping to design environmentally-friendly buildings.

Read the full story at NewsTimes >>

Dana L. Crupi, University of Central Florida chapter, was unanimously voted to become the new Chief Executive Officer for the Early Learning Coalition of the Emerald Coast, an early education and child care services company. Prior to the promotion to CEO, Dana was the Chief Operations Officer and an Early Learning Director for the organization.

Her duties over the years ranged from budget preparation to overseeing surveys and studies to improve staffing. Other leadership roles she has held in the past include Chief Executive Officer of Amazing Explorers Academy in Orlando and Program Director and Office Coordinator for the Early Learning Coalition of Osceola County.

She holds a bachelor's degree in social work as well as a national certification in Nonprofit Management and Leadership from UCF. She will continue to use her leadership skills to help inspire future generations.

Malika Pegues, a U.S Air Force veteran and mother of three, has been awarded the first $1,000 scholarship from the Kathleen Mullally Foundation, a nonprofit organization that helps pregnant students or students with children continue their studies. The NSLS Chapter President at Queens College works two jobs as she continues her studies, one as a team leader of crisis counselors at Project Hope, and another as an organizer of recreation programs for children with learning disabilities.

At one point, Malika lived with her children at a women's shelter before making the decision to go back to school and earn a degree. She believes in giving back, and has donated a portion of her scholarship money to charity.

Read the full story at The Tablet >>

Koral Booth, from the Hudson County Community College chapter, will be sworn in as the Alumni Representative on her school's Board of Trustees. This comes after much adversity, as the mother of four lost her mother to cancer and her father to heart disease all during the course of her studies.

She remained determined and graduated in May with an Associate of Arts in English, making the Dean's List twice and, as a 37-year-old student, she became a role model for non-traditional students as they set out to accomplish their goals.

She started "The Later in Life Leaders" club for older HCCC students, and she mentored her peers on campus as a Peer Leader. The former NSLS Chapter President also helped students with their writing as an Educational Opportunity Fund (EOF) English tutor. Next, she will enroll at Saint Peter's University to pursue her bachelor's and master's degrees.

Angeline Gil of Berkeley College will be honored as a Rising Star at the 7th Annual Women Business Leaders Forum, awarded to only five students who demonstrate a high level of academic work, community service, and overall leadership. Full story >>

Paul Wesay, an entrepreneur based in Atlanta, and an alum of the Southern New Hampshire University chapter, has supervised the donation of materials throughout communities in Liberia to help aid during the COVID-19 pandemic. Full story >>

MollyAnne Lloyd, an industrial engineering student at Penn State University, has been awarded the Spanco Honor Scholarship for being a top student studying industrial or mechanical engineering. Full story >>

Gerlean Y. Baylor, Capella University, has published a children's book called My Pretty Inside, advocating positivity and the true value that everyone holds within themselves, an empowering children's narrative. Full story >>

Donielle Pankey's artwork to coincide with the movie launch of Candyman was on display at The Floyd-Payne Campus Center at Tennessee State University. Only six HBCU students were chosen for the movie tie-in artwork installation. Full story >>

Carla Diab, a finance major at Cleveland State, has been given the Awards in Excellence in Finance by the Rotary Club of Cleveland. Full story >>

Megan Kruzinski, SUNY Cobleskill, is the 2021-2022 recipient of the $1,000 SNVC Scholarship award to a deserving MBA student, awarded to a student in good academic standing who also demonstrates leadership skills. Full story >>

Taylor Morgan, University of Lynchburg, has been elected Secretary of her university's Student Executive Board and will help to lead her student body. Full story >>