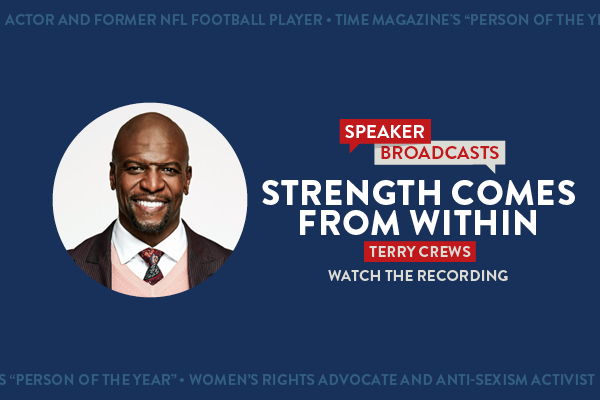 As a former NFL athlete, Terry Crews may have looked tough on the outside. But, as the successful actor, artist, and activist spoke about in his NSLS Speaker Broadcast, it was all an image he was trying to uphold—even when it felt like things were falling apart.

"I used to have petrifying fear," he said. Whether it was because he was broke, nervous to be around others, or feeling like he lacked talent, it took him years to find his footing.

He finally realized that talent had nothing to do with success. "This have-it-or-don't thing, this mindset of being born with it or not, is very, very wrong," he said.

So, how did a guy who couldn't draw eventually land a job as a courtroom sketch artist? He attributes his success to self-discipline, something he carried with him to his other endeavors in life, detailed in his new memoir, Tough: My Journey to True Power.

He stressed how much true strength comes from within. An example he used was working on The Expendables, where he felt he was being underutilized and had a negative attitude on set.

But he was able to turn his attitude around and director Sylvester Stallone took notice. As a result, what he did for Terry is a lesson to always have the strength to change and see the positive in every opportunity.

Lessons from a Leader Who Learned How to Succeed

In this broadcast, Terry discusses: