Embracing Change as a Tool for Success 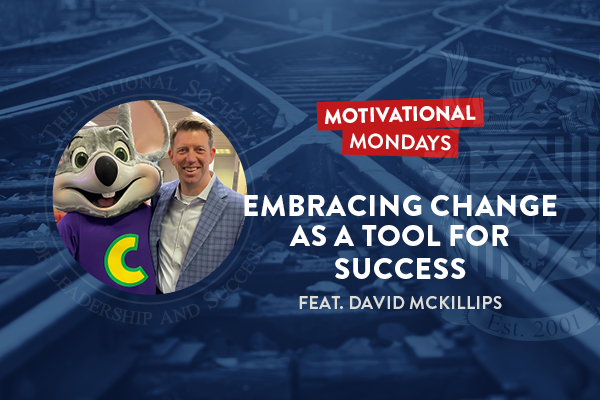 David McKillips is the CEO of CEC Entertainment, the parent company of Chuck E Cheese and Pasqually’s Pizza & Wings. He’s made headlines recently for his game-changing reimagining of the Chuck E Cheese brand.

In this episode of Motivational Mondays, we discuss the power of thinking outside the box to achieve your goals.

As a kid who grew up in St. Louis, MO, David dreamt of seeing the beach and spending time on the coast. So when the opportunity arose, he and some buddies jumped into a car and got jobs at SeaWorld in Orlando, where his first job was cleaning up trash at the dolphin pool. He saw children light up with smiles like he’d never seen before and knew his future was in family entertainment.

After some time working at SeaWorld, he transferred to Sesame Place outside of Philadelphia. This led to a job at DC Comics where he worked for 10 years—and how he ultimately ended up at Six Flags.

David points out that DC Comics licenses their characters to Six Flags. And while in a meeting with the new CEO, Dave was invited to join the new management team. He started in a partnership platform and moved his way into different roles throughout the company.

David emphasizes that “You never know what path is going to be sitting in front of you. And if an opportunity comes and it looks like something that could challenge you, then just take it.” So he did.

If he didn’t embrace the challenge of tackling something new, he wouldn‘t be at CEC Entertainment today. David is an example of learning as you go, putting in the work, and not being afraid to take chances.

How the Chuck E Cheese brand pivoted during the pandemic

David joined CEC Entertainment in January of 2020—just months before the pandemic hit. By March, they were forced to close all of their restaurants. David points out that Chuck E Cheese has fantastic pizza but they’re more well-known as a place for kids’ birthday parties and family entertainment.

The simple fact is that single folks and young adults don’t head to Chuck E Cheese to grab a pizza. But David knew that their great pizza could bring in revenue. So they decided to launch a ghost kitchen brand, Pasqually’s. They took their great ingredients, flavored them up for a more mature taste, and remarketed them to a new demographic. It was a move for survival in a time of unknowns.

It wasn’t a haphazardly chosen name either—Pasqually was already a well-established presence in the Chuck E Cheese music band. Why create a different brand when this great character already existed within their brand? It was a fun way to create a brand extension that made sense.

But how did they deliver the entertainment piece?

David shares that they recorded all of their entertainment so it could be consumed at home and online. You want Chuck E Cheese to sing you happy birthday? Are you looking for seasonal content? It can all now be found on their website. They even create albums on Spotify and iTunes to truly bring the Chuck E Cheese music experience into homes.

To create a new Chuck E Cheese in-store experience, David wanted to make a splash. He led the team to create their “Summer of Fun'' album — a new project of original songs by Chuck E Cheese and his band.

Like any other great artist, they decided to move the characters outside of the store for the first time ever as a live touring band. The tour kicked it off in Clearwater, FL, and ended in Dallas, TX. It was a smashing success.

How is Chuck E Cheese reimagining the brand for the next generation? Listen to the whole conversation to learn how David and his team are working to transform the Chuck E Cheese of the future and how you could join their winning team.

Listen to the bonus episode to learn why it’s necessary to adapt to your current situation and how to become a job candidate at CEC entertainment.

Only You Can Save Yourself