How to Create Effective Teams and Organizations Using Cognitive Diversity

Many organizations strive to create and foster diverse teams, which have been proven to increase productivity, creativity, engagement, and lower turnover rates. However, according to a new report entitled “Great Minds Don’t Think Alike,” many of these initiatives fall short because leaders often have groupthink.

The team, led by Johanne Grosvold from the University of Bath and UK pension provider Scottish Widows, states:

“Despite a welcome focus on improving gender and ethnic diversity within leadership positions, many companies may still be hindered by ‘groupthink,’ with too many executives from similar backgrounds and similar viewpoints.”

The good news is that the report also explores how to eliminate groupthink by paying more attention to cognitive diversity and constructive disagreement.

This week in The Science of Leadership, we explore the team’s study and dive into the world of cognitive diversity to examine how we can lead and create outstanding teams that make a genuine difference.

Before we jump into the study, we must have a baseline understanding of cognitive diversity and how it differs from the ethnic and gender diversity initiatives that we’re all familiar with.

Cognitive diversity works by bringing together a group of people with different thinking styles. These differences can include varying perspectives, specialized abilities, differing knowledge sets, attitudes, information styles, and demographic characteristics such as race, gender, and religion.

Cognitive diversity goes one step deeper than surface-level diversity, which typically factors in demographic characteristics but doesn’t necessarily include thinking styles or other differences.

When a group is cognitively diverse, they have what’s known as “constructive disagreements,” which allows all angles to be considered when it comes to decision-making. As a result, the outcome has been more thoroughly vetted and more likely to produce a beneficial conclusion.

Cognitive disagreement is the polar opposite of groupthink, which occurs when members of a group have too many like-minded opinions to challenge new ideas. Instead of thoroughly vetting ideas, groupthink takes over and creates an echo chamber that produces less than ideal results.

The Study: Digging Deeper Into Diversity

To gain a better understanding of this issue, Johanne Grosvold from the University of Bath teamed up with the UK’s largest pension provider, Scottish Widows, to shine a light on some of the positive impacts that cognitively-balanced teams enjoy and how organizations can start adopting the process.

To produce their report, the team reviewed 17 academic journals and spoke to high-level executives, focusing much of their research on board member composition. They came to the following conclusions:

The big takeaway is that overall, diverse teams perform better, solve problems quicker, and learn things faster; however, many organizations struggle to create these teams.

"The report shows that companies are aware of the issue of cognitive diversity but are not yet taking systematic action to ensure corporate boards benefit from it,” said Grosvold. “In the meantime, companies are exposed to the drawbacks of being governed by a group of people who may be characterized by narrow thinking and less diversity of views.”

One of the main reasons more companies don’t utilize cognitive diversity to its fullest potential is that it’s extremely tough to pull off. Understanding thinking styles is incredibly difficult to see, making the creation of cognitively-balanced teams a true challenge.

“Someone being from a different culture or of a different generation gives no clue as to how that person might process information, engage with, or respond to change,” they said. “We cannot easily detect cognitive diversity from the outside. It cannot be predicted or easily orchestrated. The very fact that it is an internal difference requires us to work hard to surface it and harness the benefits.”

Reynolds and Lewis also explain that cultural barriers often stand in the way of cognitive diversity because of people’s inherent want or need to fit in.

“If you look for it, cognitive diversity is all around — but people like to fit in, so they are cautious about sticking their necks out. When we have a strong, homogenous culture (e.g., an engineering culture, an operational culture, or a relational culture), we stifle the natural cognitive diversity in groups through the pressure to conform. We may not even be aware that it is happening.”

With all of these challenges in front of them, many companies simply ignore cognitive diversity and focus on demographic diversity, which is still a step in the right direction but leaves opportunities for improvement.

It falls on leadership to take the additional step required to have true cognitive balance.

Leaders have the power to change their organization’s culture, but they must be equipped with the proper training and tools, especially when it comes to the complexities of cognitive diversity.

This is one of the reasons why diversity is so important when it comes to our leadership programming at The National Society for Leadership and Success (NSLS). One of the ways we teach members to understand diversity on a deeper level is by utilizing “The Inclusion Iceberg.” 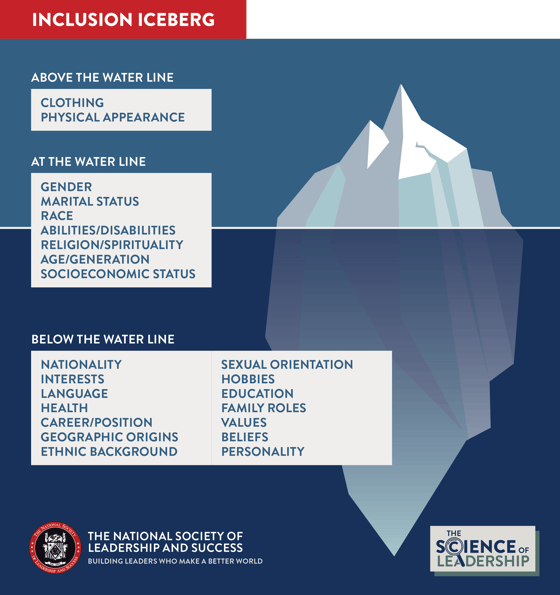 The Inclusion Iceberg demonstrates the various levels of diversity. First, you have what’s above the surface; this includes clothing, appearance, gender, marital status, race, age, and other demographic factors. Types of diversity below the surface include health, sexual orientation, education, beliefs, geographic origins, and much more.

How to Create an Inclusive Environment

The real challenge for leaders is fostering a culture where people can be their authentic selves in the workplace. If team members cannot be themselves, how are leaders supposed to truly get to know them?

One of the best ways to achieve this level of understanding is to break employees or teammates up into smaller groups that can get to know each other. For this to succeed, these groups have to be judgment-free spaces.

By implementing small groups, everyone will feel more comfortable and leaders can begin to understand how to create cognitively-diverse teams that bring a plethora of experiences to the table.

The new report helps crystalize what many previous studies have suggested: true diversity is cognitive diversity.

To begin building cognitively-diverse teams, organizations need to lean on strong leadership that creates an open, honest culture that encourages people to be themselves.

Ready to dig deeper? Read this week’s study in its entirety here and their executive summary here. Want to learn more about diversity issues like this? Check out our recent article: The Gaps in Diversity, Equity, and Inclusion, Explored. 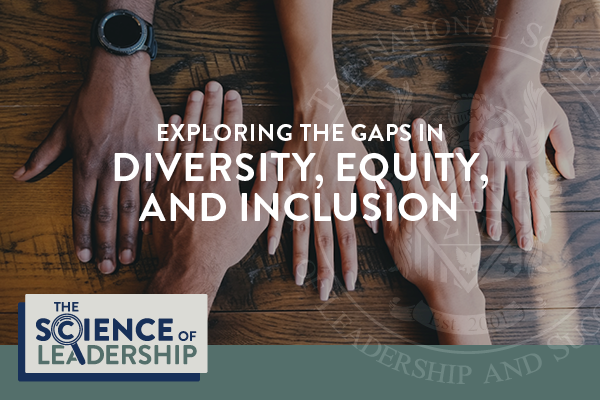 The Gaps in Diversity, Equity, and Inclusion, Explored

Many companies claim that diversity, equity, and inclusion (DEI) initiatives are one of the most important factors for their business, but according to the SmartRecruiters “State of Diversity Hiring Report 2021,” 51 percent of organizations lack even a basic DEI plan.