4 Tips You Can Use Now for Managing Difficult People 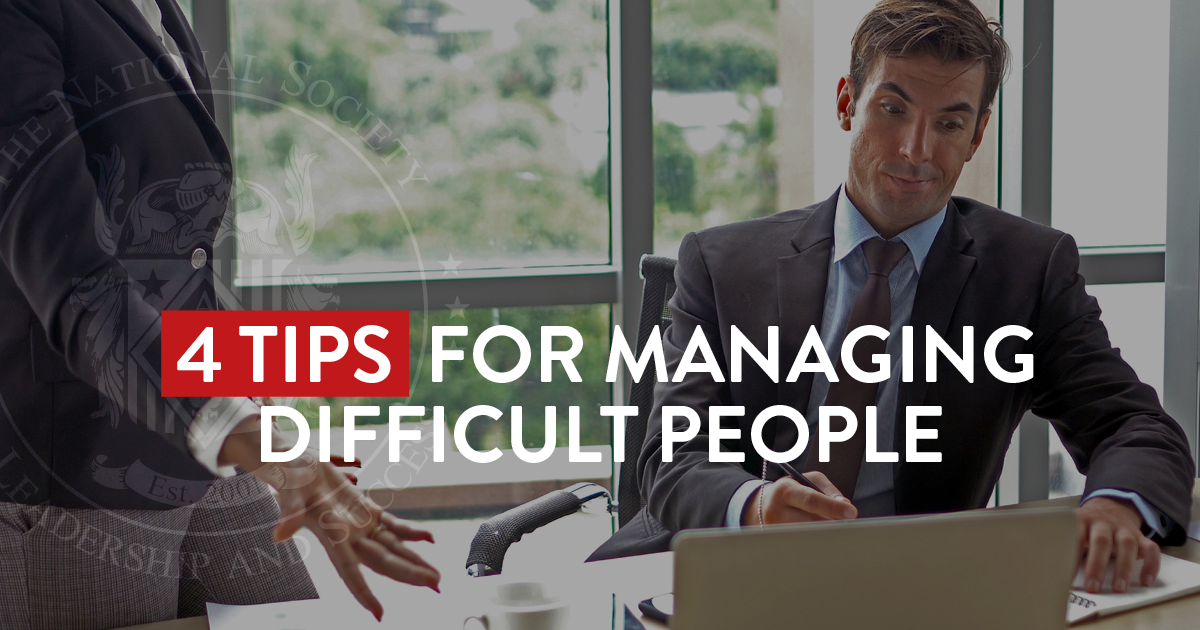 Being a successful leader is about knowing how to manage, inspire, and encourage a vast majority of people with varying personalities. Leaders usually work with people who are easily managed, but there are other times when they’re faced with the challenge of how to lead difficult people.

Like any challenge, leading difficult people can become easier if the leader has a toolkit and plan of action prepared to handle the situation appropriately.

Today, we’ll cover some of the best techniques to manage difficult people in ways that reduce friction and preserve morale. First, let’s dig into what makes a person “difficult.”

Note before we begin: while we are focusing on employees here, leadership is found in all aspects of life, and difficult people can be found anywhere as well. These tips can be used in a multitude of situations.

The Traits of a Difficult Person

While difficult people are one of those things where you “know it when you see it,” this type of thinking largely takes place after someone has already expressed toxic traits. A more helpful strategy is to understand the traits of a difficult person, which allows for early intervention.

According to the Center for Creative Leadership (CCL), there are 11 behaviors that difficult people often have, which include:

This list is a great way to quickly gain an understanding if someone is becoming problematic. Other researchers claim there are seven core ingredients that make someone difficult inside and outside of the workplace. They include:

Obviously, people typically don’t fit inside neat boxes like these; however, understanding the common traits of a difficult person can help you identify them early and address the issue before it gets out of hand.

How to Lead Difficult People

Now that you understand how to identify potentially problematic people, how should you lead them?

Leaders can employ a few different techniques and strategies to better manage and lead difficult people and, if done correctly, can even help people become easier to work with.

1. Start by identifying the root cause

According to The Society of Human Resource Management (SHRM), one of the best ways to begin leading a difficult person is to understand the root cause of the problem. Most people don’t want to be viewed as difficult, meaning there is likely something going on that’s been overlooked.

For example, an employee may start expressing “problematic” behaviors because they have too much work on their plate, are unhappy with their current role, have issues outside of the workplace, or a myriad of other things that aren’t immediately apparent.

To shine a light on these potential problem areas, try to get a sense of the person on a deeper level. Sometimes simply addressing their concerns and making an action plan can turn things around.

Uncovering the root cause of these behaviors requires a leader to foster a culture of openness and transparency where problems are not pushed to the side. One of the best leadership styles for this is servant leadership, which hinges on putting the needs of others first and focuses on being an active listener.

You must remember the old adage that “two wrongs don’t make a right.” When communicating with a difficult person, leave judgment, negativity, and finger-pointing out of the equation.

A good way to communicate openly without falling into these trappings is to listen before reacting. Leading a difficult person takes time and isn’t something that’s suddenly fixed after one interaction.

Other tips for making sure the communication process goes smoothly:

3. Know when and how to bring in support

One of the biggest hurdles leaders face when dealing with a difficult person is knowing when to bring in additional support from other leaders, coworkers, friends, or anyone who may be able to lend assistance.

While this seems like a simple task, it’s more nuanced than you might think. There’s a delicate balance between discussing a difficult person and gossiping or complaining about them.

Gossip does nothing but make the situation worse and increases the likelihood of a toxic culture. To avoid that outcome, make sure the person you’re bringing in to help is trustworthy, compassionate, and not one to spread rumors about the difficult individual.

Here are a few tips to ensure you pick the right confidant for advice:

4. Understand when to escalate

While deploying the tactics above have a high likelihood of making difficult people easier to manage and may solve the situation entirely, you have to know when enough is enough, especially when it comes to employees.

If all has failed, it’s time to escalate the problem to your manager or members of leadership. Though this may feel like giving up, it’s the only step available after a certain point. Remember, this is the final step and should only be implemented if all other avenues have been exhausted or if the person’s behavior becomes dangerous.

Managing and leading difficult people is a unique challenge that requires care, compassion, and consideration. Each person and situation is unique and will require a different approach.

Remember that very few people start their day off intending to be difficult. There’s likely an internal reason for their negativity, and finding it can be the key to alleviating the situation.

Also, take a careful and deliberate approach to how you communicate. Stay calm, be mindful, and practice listening before reacting. If all fails, reach out to other leaders, friends, or family members to lean on their experiences. 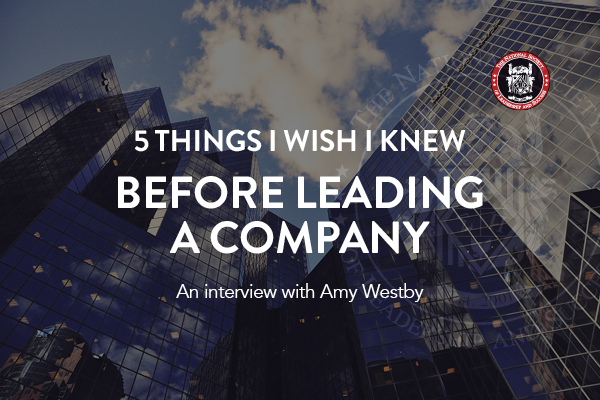 5 THINGS I WISH I KNEW BEFORE LEADING A COMPANY

Amy Westby serves as the Executive Director of Strategic Initiatives, Education, and Philanthropy at the National Society of Leadership and Success (NSLS) and its NSLS Foundation. Recently she was interviewed by Authority.com for their insightful leadership series, "5 Things I Wish Someone Told Me Before I Began Leading My Company."