NSLS Members in the News: Year in Review 2021 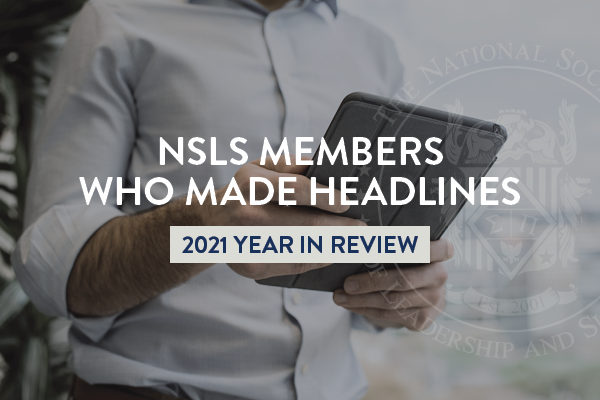 After another difficult year, it's important to look back at the positive achievements. Unsurprisingly, our NSLS members made major headlines throughout 2021 for their amazing accomplishments, which were highlighted in our Members in the News blog.

Some headlines were so impressive that we've decided to highlight them again in a Year in Review edition. Congratulations to this amazing group who accomplished so much during 2021. It takes true leadership to rise up when times are hard, especially giving back and leading others, as so many on this list have done.

Accomplishment: Isabella McCray did things a bit out of order on May 15. One week before her high school graduation, she walked the stage at South Piedmont Community College, where she enrolled with the dream of becoming a nurse. After being diagnosed with lupus at 11-years-old, she’s been on a mission to become a nurse so she can give back and help others.

Her dream is now that much closer, and at 18, happening much earlier than most. She will finish her nursing requirements this summer at SPCC and continue her education at Wingate University from there. The Dean’s List go-getter is making quick work of her leadership skills!

Read the Full Story at The Anson Record >>

Accomplishment: After graduating from the University of Colorado Colorado Springs, Victoria Jones will be taking her leadership skills to the University of Alabama School of Law on a full-ride. At UCCS, she led the charge as an intern for Brainitz, conducting market research on national organizations and helping prepare a competitive analysis for a key pitch to the Computing Technology Industry Association.

Though her undergraduate degree is in marketing, she always dreamed of pursuing a career as a lawyer and minored in pre-law. Her leadership skills extend beyond the classroom or the courtroom. Jones volunteered for nonprofits, such as One Fair Wage and the Beagle Freedom Project. She plans on pursuing business law once she earns her law degree.

Read the Full Story from The University of Colorado Colorado Springs >>

Kailyn Brandt was nominated for the Centennial Conference 2021 NCAA Woman of the Year award. This annual award is given to graduating female college athletes who have distinguished themselves throughout their college careers in academics, athletics, service, and leadership. She has since been chosen as a top honoree in the entire NCAA.

The team captain and three-time All-Centennial honoree on the Shorewomen field hockey team demonstrated leadership in Washington College’s Student-Athlete Advisory Committee, plus developed and facilitated initiatives promoting team unity, community outreach, and career development among student athletes. To help during the COVID pandemic, she worked as a nursing technician at the University of Maryland Shore Regional Health Center.

The four-time National Hockey Coaches Association Scholar of Distinction graduated with a 3.92 GPA and earned a degree in biology with a minor in chemistry.

Accomplishment: Thurston Smith of Capella University earned this prestigious honor through his service as a Federal Advisory Committee Member for the US Treasury Department. The Presidential Service Award recognizes outstanding citizens who have selflessly dedicated their time and resources to the community, making a positive impact and inspiring those around them to take action. This comes after a decorated career with the US Veterans’ Health Administration and years working in healthcare and community advocacy.

A policy activist and community organizer, Smith has been at the forefront of improving policies in health and human services for years, organizing countless educational workshops and seminars to encourage others to join the fight with him. He was recently chosen by the Biden/Harris Presidential Inauguration Committee to host a public forum commemorating Martin Luther King, Jr.’s National Day of Service.

Alum's Nonprofit That Helps Military Named Nonprofit of the Year

Accomplishment: Raven Hilden of the University of Phoenix chapter was awarded the Fannie Griffin-McClendon Scholarship for her dedication to volunteer work, and her efforts have since earned her 2021 Nonprofit of the Year by the Murrieta/Wildomar Chamber of Commerce. She received the $5,000 scholarship, awarded to military families, for her work with veterans and active members.

Raven started MilVet in 2016, a nonprofit organization that helps veterans, active service members, and their families by delivering boxes of food, hygiene products, and more. As a military spouse, she came up with her nonprofit idea for a course at The University of Phoenix and has since made it a reality. She continues to help active service members and veterans by sending out packages every month with letters of thanks attached to them.

Accomplishment: Malika Pegues, an Air Force veteran and mother of three, was awarded the first $1,000 scholarship from the Kathleen Mullally Foundation, a nonprofit organization that helps pregnant students or students with children continue their studies.

The NSLS Chapter President at Queens College works two jobs as she continues her studies, one as a team leader of crisis counselors at Project Hope, and another as an organizer of recreation programs for children with learning disabilities.

At one point, Malika lived with her children at a women's shelter before making the decision to go back to school and earn a degree. She believes in giving back and has donated a portion of her scholarship money to charity.

Read the full story at The Tablet >>

Tonya Hensely, a nursing student at Stanislaus State, is a recipient of the Trustee Emeritus Ali C. Razi Scholar Award – a $15,000 scholarship by the California State University Office of the Chancellor. Each year, CSU honors 23 students to receive their highest recognition. Tonya earned the scholarship through hard work and passion to help others.

When she's not studying or taking care of her children as a single mother, she provides free childcare to other single working parents. During the pandemic, she helped seniors with their grocery shopping and other errands. Her love of children led her to pursue nursing school to become a labor and delivery nurse.

She has made Dean's List and works as a student assistant for the School of Nursing in addition to her other charitable work.

Beth A. Pritchard, University of Hartford chapter, has been confirmed as a United States Army Reserve Ambassador for Connecticut. She earned this distinction after holding several leadership roles, including founder and CEO of BETERI Consulting Group, a management consulting firm.

She comes from a multigenerational military family and her spouse is a veteran who served as a US Army Defense Artillery Officer. She helped secure funding for military programs and organize transitional housing for veterans, plus many other initiatives.

School: University of Tennessee at Martin

Debra Craig joined the leadership team at Discovery Park of America. The new Director of Finance manages the business and financial aspects of the expansive museum and heritage park in Union City, Tennessee.

She brings over 20 years of experience, a bachelor's degree in business administration, and a master's degree in educational leadership from the University of Tennessee at Martin. She is active as a leader outside of her career as well, and is involved in many nonprofits and other community service initiatives.

She is vice president of the Obion County/Union City branch of the NAACP, and volunteers at the Delta Academy Youth Initiative, Trudy's Kids Cafe, and other community outreach programs.

Read the full story from Discovery Park of America >>

After a long battle with addiction, Vincent Thompson graduated from Indiana University of Pennsylvania with a master's degree in applied mathematics and a minor in physics. At one point, his struggle with drugs and alcohol landed him in prison. He recently shared his remarkable story of resilience, highlighting the importance of education.

At school, he took on leadership roles as secretary of the IUP mathematics club, president of the IUP chapter of the Society of Physics Students, president of the IUP Physics club, and many other notable positions, all while maintaining a 4.0 GPA. He’s received numerous scholarships and awards, including being named a National Science Foundation graduate research fellow, and he’s spoken at various group homes to help inspire those struggling to find purpose.

Vincent is currently in the five-year doctoral program at Rice University in Texas where he’s continuing his studies in mathematics. Watch this inspiring video about Vincent from the Indiana University of Pennsylvania.

Read the full story from The Penn >>

NSLS Member Is the Youngest Professor at College

At twenty-eight, Daren Johnson of the Northcentral University chapter, is the youngest full-time professor at Howard Community College in Maryland. The story of how he achieved this goal in such a short time is a lesson in determination.

Motivated by his fight against injustice, he plans on continuing his education after completing his PhD by attending law school. He hopes to help reform family and immigration laws in Jamaica and the United States. In addition to his studies and teaching, he serves as a Step-Up coach, helping to mentor and assist students.

Read the full story from The Gleaner >>

Luca McLeod of the Barry University chapter was recognized for his achievements in the classroom, as well as his leadership and service within the Barry community and beyond. His 3.97 GPA and consistent Dean's List and President's List achievements were only one reason why he earned the selective Dean's Award for the Mathematics and Sciences department.

Outside of the classroom, Luca spent several days in Panama City, Florida to help with hurricane relief and in Tallahassee to lobby for "Dignity for Incarcerated Women." In 2020, he traveled to the Bahamas with Barry's School of Education as part of a program focused on education and hurricane relief. He’s also served food at the Miami Rescue Network and participated in the Florida Keys Hurricane Relief effort.

Here's to another year filled with inspiring headlines and outstanding accomplishments from our NSLS members. Stay tuned for our January 2022 Members in the News!