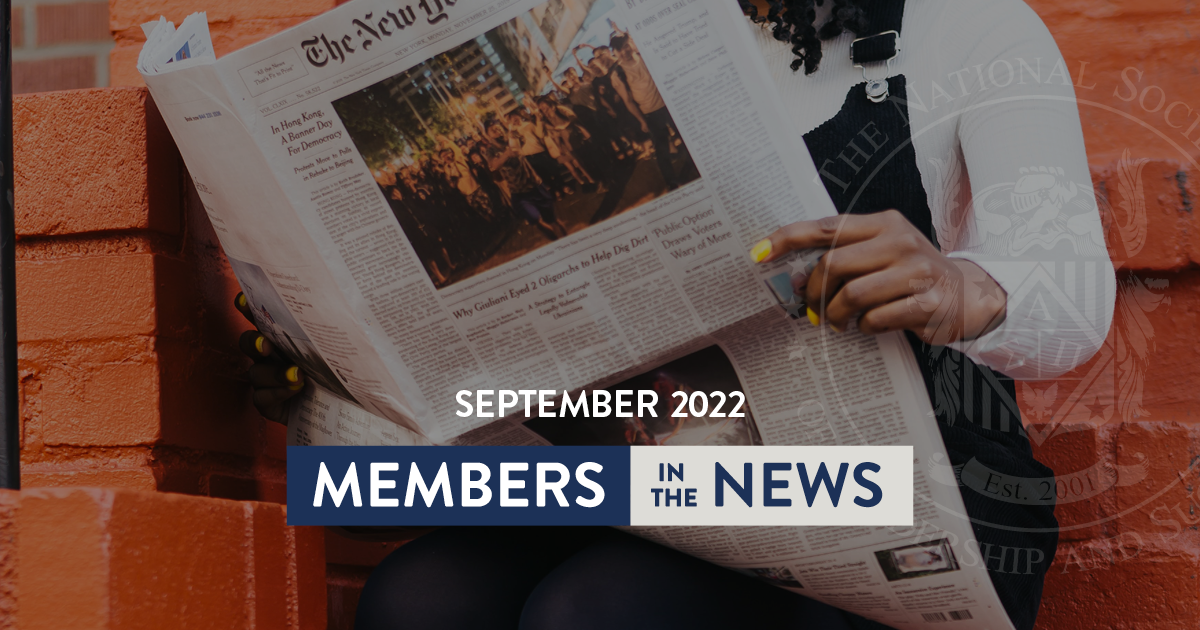 Once a month, we bring you the inspiring stories of NSLS members as they use their leadership skills to accomplish their goals. Even with the semester in full swing, they’re continuing to make an impact and make headlines.

Our mission at the NSLS is to Build Leaders Who Make a Better World. Our members participate in volunteer events, and take part in a wide range of community service initiatives. Upon graduation, they apply the interpersonal skills they've acquired to start businesses, pursue promotions, and more.

Ryan Hamze, Western Governors University, was named to Arab America Foundation's 40 Under 40 list for 2022. The list recognizes accomplished Arab Americans in many different fields and industries, including education, business, engineering, healthcare, and more.

A blogger, mentor, activist, and software developer, Ryan is currently working as a project manager at a global agriculture and construction vehicle manufacturer. He also owns his own business, Aabey, a startup that connects technology and hydroponics that involves growing crops without soil through water-based techniques.

His achievements include being named an Innovation Award Honoree by Wichita Business Journal for his work addressing global food scarcity through technology. He strives to make a better world beyond the realm of business, volunteering with several organizations.

He holds many cybersecurity and leadership certifications, and earned a master's degree in information technology management. Ryan lives by the phrase, "Dare to dream out loud," with his own dream of making a positive impact through innovation for communities struggling with a high Global Hunger Index.

Angel Beebe, Hudson County Community College, is the recipient of the 2022 Kaplan Education Foundation (KEF) Leadership Scholarship. This recognition is given to high-potential, underrepresented, and low-income community college students to aid in completing their associate degree or to help them transfer to earn a bachelor's degree.

She proved to be a natural leader at HCCC, where she eventually became president of the Student Government Association. She completed a research project highlighting racial injustices, organized a Thanksgiving food drive for a local homeless shelter, and is focused on empowering Black women to feel confident entering the scientific field.

Read the Full Story at the Hudson Reporter >>

Young Advocate Given Platform to Continue Making a Better World

The yearlong program helps students grow as leaders and inspires them to lead through volunteer efforts and community-building initiatives. Jewel demonstrated leadership excellence as a member of the women's volleyball team and served on the school's Student-Athlete Advisory Committee.

She made Dean's List from spring 2019 through spring 2022, and has already been a voice for others, advocating for human rights, social justice, mental health, and sexual assault awareness.

Jewel openly shares her own battle with mental health and being a victim of sexual assault, using her story to help others. Her ultimate goal is to become a lawyer to have the greatest impact possible, eventually entering politics to advocate for marginalized communities.

Psychology Graduate Creates Nonprofit to Be Agent of Change

He recently was a guest speaker at the 2022 American Psychological Association (APA) Convention. Soon after, he completed his graduate program, earning a master's degree in psychology. His capstone research project delved into oppression-induced dysthymia and how violence can be a cathartic response to oppression and depression in African American communities.

During his graduate program, he served as the first African American editor of an APA division newsletter, and he established a nonprofit, The Path: An Agent of Change, Inc. Motivated by his wife's experience with preeclampsia, which led to the premature birth of their first child, Johnson strives to investigate healthcare disparities and further positive change.

He submitted his idea for the nonprofit to the NSLS's United by Purpose Grant, placing second. He used the funds from the NSLS to launch the organization. His ultimate goal is to answer one key question: how can we get along?

Cybersecurity Leader Connects His Love of Tech with Helping Others

He always wanted to connect his love of technology with his passion for helping others. Originally, he followed in his mother's footsteps into the healthcare space, beginning as a caregiver and cook at two different nursing homes, including head night cook for more than seven years.

He leaned into education to get to where he is today. He particularly loves working to protect patients and the fact that his leadership role enhanced his responsibilities beyond IT, including emergency preparedness, training, and safety.

Sherrina Herrera, Dean College, received an Academic Achievement Award by the Soboba Tribal Council, and hopes to earn a bachelor's degree to become an investigator in the US Army Criminal Investigation Division.
Full Story >>

Lisa Rawus, Northcentral University, has been named director of member relations and engagement by the TriCounty Area Chamber of Commerce in Pennsylvania following 10 years of experience in customer service and communications. Full Story >>

Jerome Davis, New York City College of Technology, has been recognized for his excellence in music production, having established BritLake Records in 2007, where he remains owner and producer. Full Story >>

Yolonza Ford, University of Arkansas - Fort Smith, is a $1,500 scholarship recipient from the Hot Springs/Hot Springs Village branch of the American Association of University Women as she works on earning a bachelor's degree in criminal justice. Full Story >>

Aharon McKee, Catawba College, was named a Fall 2022 Victory Congressional Intern by the LGBTQ Victory Institute, placing him on Capitol Hill for an internship with Senator Jacky Rosen of Nevada. Full Story >>

Claire Foley, Merrimack College, joined ABC 13 as a multimedia journalist after graduating with three degrees, including a bachelor's in human development and human services, and master's degrees in management and communication. Full Story >>