How Patience and Curiosity Helped This Leader Out of Prison 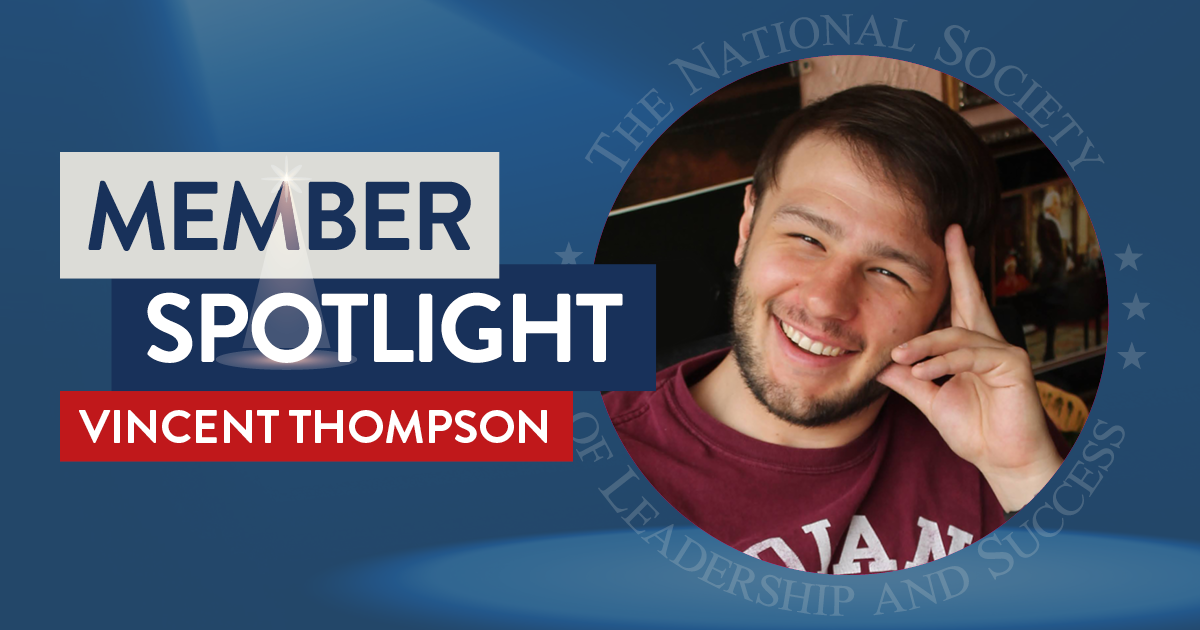 At one point, Vincent Thompson's struggle with addiction landed him in prison. Since then, he's made massive strides toward a better life. His achievements and resilience had him featured in our November Members in the News and again in our Year in Review.

He graduated from Indiana University of Pennsylvania with a master's in applied mathematics and minor in physics, and is currently enrolled in the five-year doctoral program at Rice University where he’s continuing his studies in mathematics.

He excelled in school, taking on leadership roles as secretary of the IUP mathematics club, president of the IUP chapter of the Society of Physics Students, president of the IUP Physics club, and other notable positions, all while maintaining a 4.0 GPA. He was also named a National Science Foundation graduate research fellow and he’s spoken at group homes to inspire those struggling to find purpose.

Through his own experience battling addiction, he knows how important it is to take things one day at a time when achieving your goals. To him, the day-to-day is more important than some lofty goal far in the distance.

"Work on the things that make you the person you want to be every day. The big picture can be misleading and it makes you narrow-minded. If you're focusing on yourself you may learn something about yourself that may change the big picture."

Knowing When to Pivot on Your Goals

When we asked Vincent about the steps he took to achieve his goals, he reiterated how much of a refining process it is.

"The steps I took were: Get out of prison, get into school, and study every day. I guess you could say it's finding what you're passionate about and then just refining to smaller goals that are more achievable, and let it be loose enough that it can change."

Vincent's process for setting goals is reminiscent of PACT, a goal-setting technique that is all about output and being able to pivot when circumstances alter your course. By setting goals in this way and pairing passion with work, he was on a solid path to success.

He also talked about the importance of reading, which led him to more complex mathematical concepts.

"I started to read voraciously. I just read everything all the time. Particularly, in the fields that I was interested in. At the time, I didn't understand a lot of it. But repetition and continually being curious was super helpful."

Curiosity was something that continually came up during our discussion. Besides patience and setting down goals one day at a time, curiosity is another attribute he constantly leans on.

"You could only really be patient in pursuing a solution if you're genuinely curious about the subject. So, curiosity is probably my other skill. Honing curiosity and finding new things."

He’s inspired by the theoretical physicist Richard Feynman for this reason. "He's an intensely curious person who always sort of looked for his own solutions, and studied others until he completely understood them from the ground up. Whenever I'm stuck on something, I realize that even the best were stuck and had to do the same thing I did."

To give advice means to be able to receive it. Vincent's curiosity extends beyond just his subject matter. He's always open to what others are saying to him.

"It's sort of an amalgamation of years of advice from people, from being a child up to last week. You're always taking tidbits from people and I think that's a really good approach. When you meet somebody, see the best in them and take what you can. Not in a selfish way, but learn from everybody. Don't look for their worst qualities, look for their best ones, and find out how you can apply that to your life."

As for what it takes to become a leader, Vincent surprised us with his answer. "Don't try to be a leader," he said. Instead, he believes in putting yourself first, which would make you a stronger asset for others.

"Try to lead yourself to where you want to be and I think others will follow. It's always important to make sure you're doing the best that you can first."

Though he admits he's a bit uncomfortable at the idea of being a leader, he likes the idea of servant leadership and being available to help others.

Vincent attributes his success to his mother, who also battled adversity to achieve her own goals of continuing her education and earning her PharmD. But the support system extends beyond his mom. He also recognizes the positive impact his girlfriend Maria and his son have had on his success.

"They deserve recognition because without a support system, it's very difficult and that's one of the things that is important for me. I want to help foster a support system for others in the future."

When we asked him what his next goals were, his one-day-at-a-time approach was clear. "Right now, I have homework due."

He did, however, expound a bit more. "The most short term goal I can give you is to pass my exams and move on to the research aspect of this whole process and in the summer really get into reading about my subject."

Reading, learning, and always being curious. These are leadership tenets that have lifted so many others out of tough situations. We're glad Vincent is sharing his story because it provides value for others to learn how to approach their own goals and push through obstacles, one day at a time.

Feel like you're in a tough spot or that your past is a burden keeping you from achieving your goals? Readjust your thinking and keep moving forward. Read How to Reflect on Past Experience to Redefine Your Normal for tips and inspiration to get out of a rut.