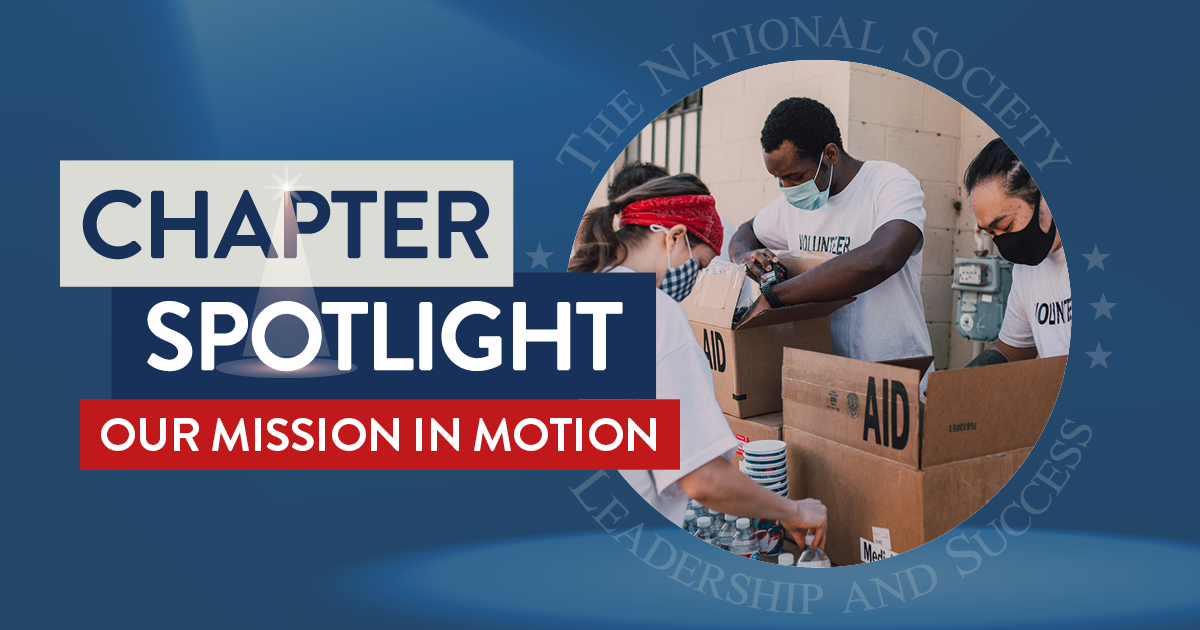 With November here and Thanksgiving right around the corner, we're highlighting chapters over the past year that were dedicated to giving back to their communities.

Every month, we highlight successful chapters of The National Society of Leadership and Success (NSLS). Those chapters strategically engage with members, identify and solve problems, help members land jobs, and live our mission through service initiatives to build leaders who make a better world.

The chapters below went out into their communities to do just that.

When Russia initiated an unprovoked attack on the sovereign nation of Ukraine, the world was shocked. Many answered the call to give back, including the Rensselaer Polytechnic Institute chapter in Troy, New York.

That region of New York is home to thousands of Ukrainian-Americans, so they saw helping as not only a need for Ukraine, but also their immediate community. With that mindset, they set out to help in any way they could.

To their surprise, the biggest need wasn't food or clothing—it was medical and tactical supplies. They were able to help by partnering with the local community through a grassroots relief effort, delivering arm slings, burn cream, Tylenol, and other supplies.

Members at the University of Bahamas chapter completed an incredible 1,415 hours of community service in a single semester.

A good portion of that service was done cleaning up its beaches. They partnered with Blue Lagoon Dolphin Encounters for a widespread beach clean-up with a goal of keeping The Bahamas "Clean, Green, and Pristine." They not only cleaned the beach, but they also tracked their progress to generate data to aid in monitoring pollution on the island.

With that many hours of service, it's no surprise their efforts extend beyond the beach as well. After other service initiatives, including a donation drive for a local senior center, they were nominated for Student Organization of the Year, an award given to organizations on campus that are continuously involved in the community and civic deeds.

The University of Tennessee at Martin Rebuilds a Community

Last December, Tennessee saw a record-breaking 16 tornadoes. With a servant leadership approach, the University of Tennessee at Martin chapter dedicated itself to helping rebuild their community and beyond.

Many communities were faced with destroyed homes, and serious injury and death. The American Red Cross was set up at the university already so the chapter decided to do more. They took charge, initiating a disaster relief effort of their own, packaging and donating supplies like clothing, toys, hygiene products, water, and more.

But their support didn't stop there. Afterwards, they went back out into the surrounding communities to help clean-up debris.

In an effort to re-engage students with the NSLS, Virginia State University set out to accomplish that through a strong commitment to community service.

They set a goal to achieve over 100 service hours and strategically planned to have at least five events every month, which included food drives and back-to-school donations. To remove any stigma that community service can feel like a chore, they asked members to attend at least one of these. By encouraging members to use service as a way to connect with others, their engagement took off.

As a result, multiple nonprofits reached out to partner with them on future projects and service initiatives, allowing them to receive more exposure and interest from students.

Hurricane Fiona left hundreds of thousands without power or water in Puerto Rico. On top of that, many lost their homes and belongings to flooding. The University of Puerto Rico - Rio Piedras chapter knew it had to step up.

They contacted local organizations that were already trained in mobilizing quickly. They helped these organizations collect and distribute nonperishable food items, which were donated to families in need.

Our chapters accomplish so much as a team, but our individual members have also stepped up to make a better world. Check out their success stories to see the impact they've made.