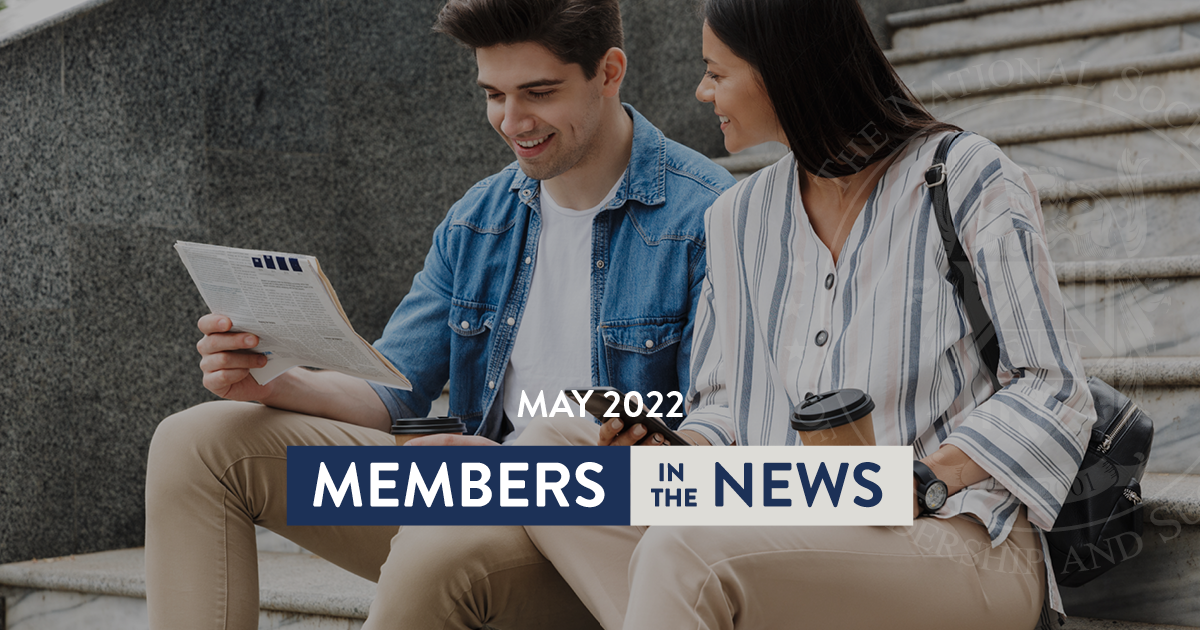 As we wrap up another school year, we’re inspired by the sheer amount of standout students who were recognized for their accomplishments in the classroom and beyond. Check out some of the incredible stories of our NSLS members making headlines in May.

Our mission at the NSLS is to Build Leaders Who Make a Better World. Our members participate in social events, volunteer for charities, and take part in a wide range of community service initiatives. Upon graduation, they apply the interpersonal skills they've acquired to start businesses, pursue promotions, and more.

The sky is literally the limit for Angel Thomas of the Embry-Riddle Aeronautical University-Daytona Beach chapter. Before her success took flight, Angel had to overcome tremendous obstacles. In 1999, her story was widely covered on the news. She was abandoned as a baby and was found battling hypothermia beneath an apartment stairwell.

She was found, cared for, and eventually adopted by a loving family. Since then, the accolades have soared in. She was Miss Teen Greensboro and runner-up Miss Teen North Carolina in 2018. At Embry-Riddle, she was class president and a member of the Black Aeronautical Professionals, the Black Student Association, Senior Student Council, and the Embry-Riddle Emerging Leaders Foundation.

She graduated with a degree in aeronautics with minors in business and occupational safety. She has her eyes set on a career in aviation safety, with the goal of becoming a director of safety for a corporation or a nonprofit.

Read the Full Story at the Winston-Salem Journal >>

First-Generation Student Is First in Family to Graduate College

Benjamin Wilson, University of Mississippi chapter, set himself up to achieve his goals and made family history in the process. The first-generation college student graduated with a degree in integrated marketing communications and will join an advertising firm right away.

Before embarking on the college path, he took a year off after high school to save money before earning an associate degree from Itawamba Community College. Benjamin then took another year off to get married and continue saving money before enrolling in a bachelor's program.

Adapting to virtual learning during the pandemic, he continued to earn high grades, and was recognized by the Chancellor’s Honor Roll each semester, all while maintaining full-time work throughout his entire college career.

He will join Neon Canvas, an advertising firm in Memphis, a company he interned with over the past summer, which is when they offered him the full-time position.

Read the Full Story from the University of Mississippi >>

Jaclyn McVey, North Carolina State University, is pairing passion with business. Majoring in business administration with a concentration in entrepreneurship and marketing, she looks forward to starting her own business soon. Her goal is to own a farm where she could pursue her equestrian skills, and train horses and riders.

She interned as a marketing assistant for the NC State Entrepreneurship program, connecting her love for marketing and entrepreneurship to prepare for her journey to own her horse riding barn and training facility. Or, a cookie shop specializing in cookies for people with dietary restrictions – another one of her entrepreneurial plans.

Darrius Frazier, Lake Land College, has used education as a stepping stone toward success. Lake Land College recently celebrated Autism Acceptance Month, celebrating the many individuals in society living and excelling with Autism. Included on this list was Darrius, an information technology (IT) major.

This standout student already holds three bachelor's degrees from Eastern Illinois University as well as an associate’s of applied science and three other certificates from Lake Land. His thirst for knowledge and love of education has driven his success, and he is also a voice on campus for destigmatizing Autism and dispelling misconceptions.

He has served as a member of the Autism Society's Council of Autistic Advisors since 2013, and is involved with the Broadcast Communications Club, the Information Technology Club, and is an archivist for The Navigator, Lake Land's student-run publication.

Read the Full Story from My Radio Link >>

Student of the Year Uses Failure as Fuel to Accomplish Goals

Dayrinia Sanders has earned many accolades at Arapahoe Community College, including being recognized as Student of the Year. During the school's annual Student Awards Ceremony, 24 students were recognized in three categories, including Academic Achievement, Student Organization Leadership, and Outstanding Engagement.

Dayrinia was recognized for the latter, but had previously earned honors in many other ways, such as earning an Inclusive Excellence Champion award. This comes after a slow start, after failing her first semester of nursing school in 2019 and ending with a 1.7 GPA. With determination and reconfiguring her outlook, she set out to not only succeed, but to lead.

She holds degrees in business and Spanish, and just completed her double major in nursing and philosophy. She took on roles which included SGA State Student Advisory Council Representative and co-founder and former president of the Peer Nurse Mentor Experience. She plans on continuing to make an impact as either a nurse practitioner in critical care or a certified nurse anesthetist, with an eye for helping those in underserved populations.

Read the Full Story from the Arapahoe Pinnacle >>

Other NSLS Members Receiving Recognition IN MAY:

Josh Bortnick, University of Arkansas, has been named to the 2022 SEC Men's Tennis Community Service Team for the fourth straight year.
Full Story >>

Sydnee Pilarski, Thiel College, earned one of her school's most prestigious awards by being named Student of the Month. Full Story >>

Dr. Kim L. Pederson, Washington State University, has been recognized for her dedication to quality care and process improvements as a registered nurse, nurse informaticist, and analyst. Full Story >>

Dr. John L. LaCasse, Northcentral University, has been Inducted into the prestigious Marquis Who's Who Biographical Registry for his work as an entrepreneur. Full Story >>

Kimberly Cloud, University of Phoenix, was celebrated for her accomplishments in business, particularly for her work with Wigs for Success and Genuinely Michelle Wigs. Full Story >>

Sydney Scott, Western Illinois University, was announced during the Inaugural Student Awards as the winner for the Department of Speech Pathology and Audiology. Full Story >>

Katherine Corr, Mount St. Mary's University, was featured in an Alumni Spotlight for her role as a legislative correspondent for the US Senate and for the positive changes she's helped make on Capitol Hill. Full Story >>

Magda Menner, County College of Morris, has been recognized for her achievements in emergency medical services after a successful career in the field. Full Story >>

Jason Gill, Morehouse College, was awarded an Oprah Winfrey Scholarship, which is dedicated to students demonstrating academic excellence and a commitment to service. Full Story >>

Audrey Graves, the founding Chapter President at Seattle University, has made headlines for Earth Day initiatives and other sustainability projects as she works to adopt the United Nations’ 17 Sustainable Development Goals (SDGs) on campus. Full Story >>

Kimberly Clisbee, Walden University, has been recognized for her dedication in the field of healthcare, criminal justice, and national/international government and security. Full Story >>

Krystyn Irby, National Online Chapter, has been selected for a 2021-22 Distinguished Student Award by the Archer College of Health and Human Services. Full Story >>