Courage and Persistence Take This Graduate to New Leadership Heights 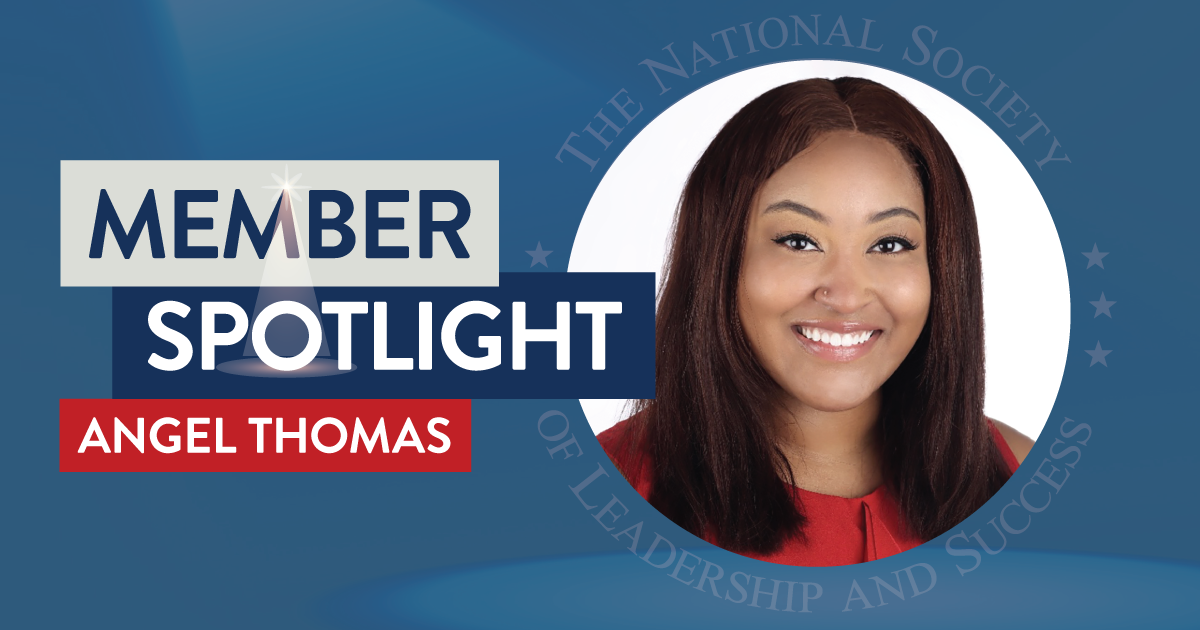 When asked about her stunning successes as the first Native American/African American licensed pilot, Bessie Coleman simply responded, “I refused to take no for an answer.” It’s a quote that’s near and dear to NSLS member Angel Thomas’s heart.

It’s also helped her achieve a number of goals on the way to graduating from Embry-Riddle Aeronautical University this year, including being elected president of the university’s student council. Holding that position hadn’t been at the top of Angel’s agenda until shortly before the school’s scheduled election.

While Angel was very active during high school, participating in 13 different clubs and holding several leadership positions, she’d chosen to focus on her studies and work obligations during college.

So, when she decided to run for student council president a week before the election, she was dismayed to realize that she didn’t know a single person in the room.

“The dean opened the floor to people nominating themselves or friends. I nominated myself and listened through the various speeches individuals in the room gave. Even the SGA president gave a speech. I felt defeated. But when my turn came, I cleared my throat and spoke from my heart, saying ‘I can not promise you that I will raise the most money, or even that I will be the perfect leader, but I can promise you that I will always do my best.’”

In a tie-breaking vote, Angel was announced the winner of this heavily contested election. That fact should surprise no one who knows her—especially those who know how her life began.

As a newborn, Angel was found under the outside stairwell of a North Carolina apartment building. She found a home with the Thomas family who ultimately adopted her and supported her strong work ethic and ambition.

In challenging times, Angel believes that there’s an opportunity to improve the outcome if you’re willing to try something new.

Every leader approaches goals from their own unique perspective. One facet of the NSLS mission is to help members develop their individual leadership strengths. Angel credits three specific personal values with helping her achieve her goals.

“Empathy, lead by learning, and creative thinking. I always put the needs of my council and everyone in it before fundraising. I wanted to create a family environment, so we often had lunch or stayed at fundraisers even when we weren’t on shift.”

Angel also brought her love of teamwork to the table and appreciation of the way a diverse group of individuals can cohere and grow.

“We laughed together, cried together, and celebrated together. I strived to start every meeting off by mentioning something good that had occurred since the last meeting. Even when we could not find something, we all talked things out as a group.”

That willingness to tackle “family business” as a team led to a participatory approach to running effective meetings that helped inspire her team. Angel learned how to use her position to marshal resources and shape discussions in which everyone could contribute.

“As president, I often led my council by curated thinking. Rather than ordering individuals around, we learned from one another. I encouraged pitching ideas and always found a way to include every idea that was pitched.

For Angel, encouraging teamwork and creativity was a recipe for success.

"I always encouraged everyone to learn as much as they could about each piece of our council and to cross workloads with one another so we could all be successful. This ties in with creative thinking. When an idea or venture did not pan out correctly, I always found a way to shift the focus and uplift other ideas.”

A good role model doesn’t have to be a high achiever in your field; we can find inspiration in a number of surprising places. For Angel, she's turned to someone in the film industry.

“Ava DuVernay goes above and beyond to raise awareness of important news and is not afraid to use her platform for education. She’s an inspiration to so many.”

Effective leaders know that being a leader is not the same as being “the star of the show,” and know how to pull back their own ego to support others. They also know that good leaders are judged by results as well as by their social and emotional impact.

“Leading is not always being front and center. Sometimes leading is stepping back and learning from the people you’re helping along the way. Leading is making an impact and making a change in people's lives. The first thing people notice is the way you make them feel. Treat others the way you want to be treated. Respect them, be kind to them, and never be afraid to learn from them.”

At the NSLS, we’ve found many sources of insight and motivation in the people and events of the past year. Read some of the most inspiring leadership stories we heard in 2022.