NSLS Members in the News: Year in Review 2022 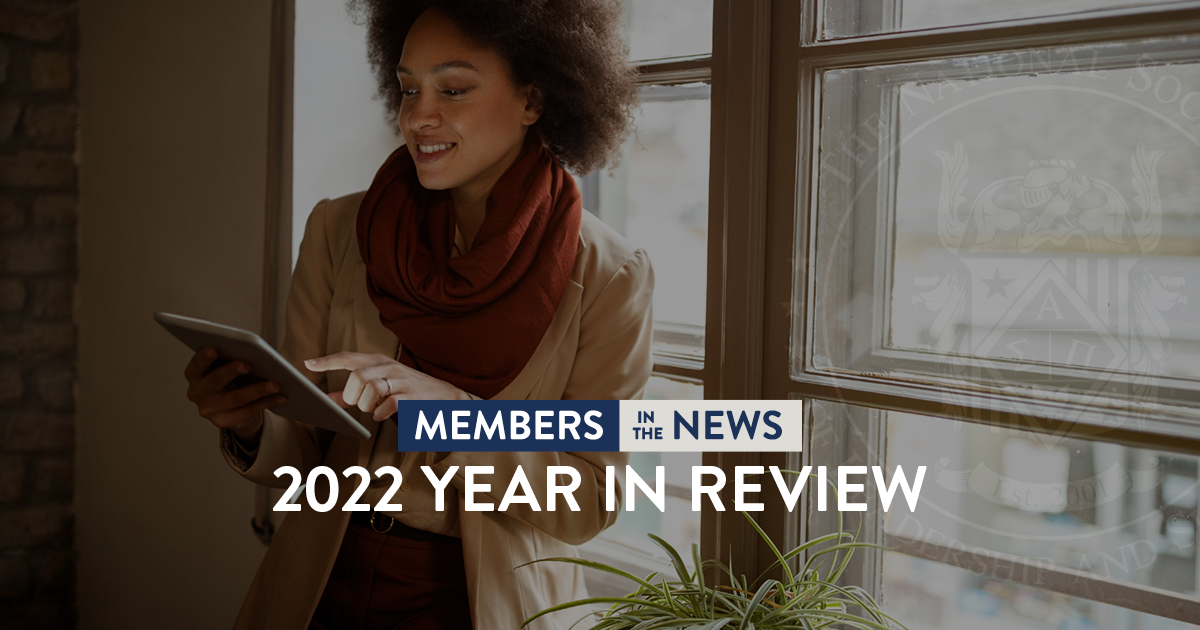 2022 is coming to a close and we're looking back on the members who made headlines for their amazing accomplishments. Some were so impressive, we're putting the spotlight on them again in our Year in Review.

Congratulations to this incredible group who accomplished so much during 2022. They embodied true leadership to achieve their goals and carry out our mission of building leaders who make a better world.

School: Our Lady of the Lake University

Accomplishment: Nuria A. Diallo Padro was recognized by the Governor of Texas, the Texas State Senate, and the San Antonio Independent School District Board of Trustees for her exceptional AmeriCorps service at a Latino-majority middle school in San Antonio.

The Penn State alum is a board member of the Penn State Social Equity Alumni Network and has always strived to give back and help others. She received the National Service "Make a Difference" Award for her innovative programming and outreach to help middle schoolers achieve academic success, grow socially, and map out their future aspirations.

She also provided outreach to families disproportionately affected by COVID-19 and Winter Storm Uri by raising funds to deliver grocery gift cards. The graduate student in social work partnered with the San Antonio Food Bank and the local school district to host a Mobile Food Pantry. As an AmeriCorps VISTA alumnus, she used the skills she learned to promote a food distribution event that brought local communities together to support 450 families.

Accomplishment: Daniel Finney has dedicated countless hours of volunteer work to help veterans. At first, helping veterans was just something his mother encouraged him to do but soon, it became a passion, something he's now been doing for years. For his dedication, Daniel was the top recipient of the Disabled American Veterans' (DAV) scholarship program.

He’s studying exercise science and hopes to become a physician's assistant as he continues his lifelong passion of helping veterans. He’s a leader on campus who encourages his peers to do the same, making sure the next generation understands the sacrifices vets have made for the country.

He serves as one of three mentors for the Department of Veterans Affairs' national Student Leadership Council and volunteers with the VA Geek Squad; a telehealth group that provides an outlet to assist veterans virtually.

Read the full story from DAV >>

Veteran Recognized for Professional Excellence and Helping Others

Ryan Luurtsema was included in Marquis’ Who's Who for his service helping veterans. Besides a long list of accolades, including being named 2021 Veteran Champion of the Year in Higher Education, Ryan is especially proud of developing an educational transition program. The Veteran and Military Resource Center has proven to be a pillar to the community, providing programs to help military members transition to civilian life and become leaders.

He established other initiatives, including Veterans' Voices, Veterans Engaging Teachers, and V.E.T.S, providing broadcast opportunities to organizations dedicated to the same cause, and other holistic transnational advocacy to get veterans what they need as they set out to achieve their goals.

Ryan earned a bachelor's in hospitality, tourism, and management from Stockton University and graduated from Colorado State University Global with a master's in organizational leadership in project management. At Stockton, he was the student president for the Student Veteran Organization and held numerous leadership roles ever since.

Accomplishment: It's hard to find an award Tionna Taite hasn't earned during her time at the University of Alabama. She was named Miss Black Alabama USA 2022, but that's only the beginning of her long list of accolades and involvement on campus.

The NSLS Chapter President's activism led to her being named recipient of the 2021 William P. and Estan J. Bloom Award, one of the University of Alabama’s highest honors. She earned this by being a leader for the Black Voices Rise panel, the Discerning Diverse Voices Symposium, and the Diversity, Equity, and Inclusion Recruitment Event. As the Diversity, Equity, and Inclusion Chair of the Alabama Forensic Council, she educates people on marginalized groups and current disparities in society.

Besides being a regular presenter on campus, she also began the first Black student-led magazine at the university. She named it Nineteen Fifty-Six for the historic year that the first Black student officially enrolled. As the founding Editor-in-Chief, she led a team of 60 talented students, generated 23,884 total digital magazine views, and raised over $30,000 in donations.

Read the full story at the Tuscaloosa Thread >>

Accomplishment: The sky is literally the limit for Angel Thomas. Before her success took flight, Angel had to overcome tremendous obstacles. In 1999, her story was widely covered on the news. She was abandoned as a baby and was found battling hypothermia beneath an apartment stairwell.

She was found, cared for, and eventually adopted by a loving family. Since then, the accolades have soared in. She was Miss Teen Greensboro and runner-up Miss Teen North Carolina in 2018. At Embry-Riddle, she was class president and a member of the Black Aeronautical Professionals, the Black Student Association, Senior Student Council, and the Embry-Riddle Emerging Leaders Foundation.

She graduated with a degree in aeronautics with minors in business and occupational safety. She has her eyes set on a career in aviation safety, with the goal of becoming a director of safety for a corporation or a nonprofit.

Read the full story at the Winston-Salem Journal >>

Accomplishment: Mya Curry received the 2022 American Association of University Women (AAUW) Award. The award is given to graduating female students with a minimum GPA of 3.5 who’ve demonstrated academic excellence and leadership on campus.

As a student, Mya served in several leadership roles and participated in many organizations, including Future Black Educators and Educators Rising Collegiate. She worked as an orientation leader for the Office of Orientation and as a peer mentor and success coach at the Office of First-Year Programs.

In the classroom, she was a regular on the Dean's List and received the Dr. Barbara K. Stanley Distinguished Student in Middle Grades Education Award and was nominated for the VSU Burning Bright Award, given to students who maintain academic success while making a positive impact on the VSU community.

As Director of the California Department of Technology, she'll lead the partnership with state/local governments and educational institutions to deliver digital services and implement quality assurance for state government IT projects.

This role also leads the charge on protecting California's public data and spearheading innovative new technologies to continue to keep the state at the forefront of technology.

Read the full story from the Office of Governor Gavin Newsom >>

Chapter President Named Student of the Year in Cybersecurity

Michael Gonzalez was named Student of the Year by the National Cybersecurity Student Association (NCSA). The vision of this organization is to cultivate a national community that supports students in their cybersecurity endeavors, whether that's through career opportunities, mentorship, or other avenues.

He earned this prestigious recognition during the 2022 3CS Conference, which comes with a scholarship to further his education. Before his goals in cybersecurity, he battled addiction. With the support from family and a passion for the subject matter, he found a fresh path to success. This passion led him to starting the NSU chapter of the NCSA on campus and he further developed his skills by serving as NSLS Chapter President.

Michael is the first in his family to attend college and looks forward to taking his bachelor's degree in cybersecurity into a career that will allow him to provide for his family. He also plans on helping other students by creating a lab and setting up partnerships with cyber firms to offer mentorship opportunities.

Read the full story from the Oklahoma City Sentinel >>

Edurne Sosa El Fakih was awarded nearly $40,000 to attend the prestigious postgraduate research program at the University of Cambridge.

Besides being an inducted member of the NSLS, she also earned an NSLS scholarship that would have taken her to Italy. The trip was canceled so she used the funding to shadow a researcher in Mexico, which allowed her to conduct work in the field while also helping launch a Spanish ecotourism initiative called Fondas de Pueblo.

Outside of her studies in anthropology, she found success as a writer, publishing a novel rooted in her and her brother's experiences together, Al Borde de un Viaje.

Angel Beebe, Hudson County Community College, was the recipient of the 2022 Kaplan Education Foundation (KEF) Leadership Scholarship. This recognition is given to high-potential, underrepresented, and low-income community college students to aid in completing their associate degree or to help them transfer to earn a bachelor's degree.

She proved to be a natural leader at HCCC, where she eventually became president of the Student Government Association. She completed a research project highlighting racial injustices, organized a Thanksgiving food drive for a local homeless shelter, and is focused on empowering Black women to feel confident entering the scientific field.

Read the full story at the Hudson Reporter >>

Joni Spencer was named a 2023 finalist for the prestigious Rhodes Scholarship. If she’s awarded the scholarship, she’ll attend the University of Oxford, England, to begin full-time postgraduate studies.

Joni is currently completing her senior year at FIU where she’s pursuing her bachelor’s degree in chemistry and mathematics. She has a 4.0 GPA and recently participated in a summer research program sponsored by the Massachusetts Institute of Technology (MIT).

Her participation in the program centered around research into the optimization of materials used in the assembly of EV batteries. The purpose of the research was to learn ways to improve the efficiency and sustainability of electric cars as a workable option to cars with combustion engines.

Originally from Antigua and Barbuda, Joni is a dedicated scholar at FIU, where she participates in laboratory research studying biochemical reactions that help protect life in space. As a student in the university’s Honors College, she works as a peer learning assistant for Calculus 3 students. She was also awarded the UN-sponsored Millennium Fellowship and is working on a project aimed at improving the financial literacy of young people.

Kelsey was also awarded the competition’s social impact scholarship in recognition of her advocacy work on autism awareness. Her initiative was designed to encourage inclusivity of the autistic community to increase acceptance and appreciation of neurodiverse skills.

For her talent performance, Kelsey sang “I Didn't Know My Own Strength” by Whitney Houston. Her career goal is to open her own service firm of visiting sports psychologists to athletes who can benefit from professional assistance.

Here's to another year filled with inspiring headlines and outstanding accomplishments from our NSLS members. Stay tuned for our January 2023 Members in the News!